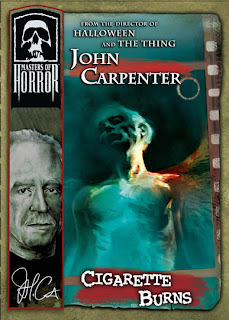 I know everyone in the world will disagree with me on this statement but Cigarette Burns is one of the greatest horror pieces ever made.  I would put it in my top five favorite horror movies ever.  Its only a hour long but it is incredibly imaginative and despite being a straight faced horror film it contains a under lying sense of humor.

Norman Reedus from Boondock Saints fame plays an acquirer of rare films who is sent by a crazy millionaire to find a film that has an extremely dangerous reputation.  Wherever the film plays everyone who watches it dies.  (Insert joke about Brokeback Mountain here.)  Udo Kier plays the millionaire who wants the film.  Its called THE END OF THE WORLD.  Its a french film and they call it by its french title which sounds way better but I am not looking it up and spelling it out.  Its too long and too hard to do.  Sorry, but they don't call me "lazy good for nuthin" for nuthin.  The film is supposedly lost forever.  Udo is obsessed with the film.  He never saw it but he has props from the film.  In his office he has the poster and these strange life sized angel wings that hang on the wall in his office.  To me this is his greatest role.  He is only in this film for like maybe a total of seven minutes but he is magnificent as a sophisticated gentleman with a eccentric cruel streak that peaks out when he takes Norman into what I believe is a hidden room where he keeps his most valuable prop from the film.  You see a strange being standing in chains on a rotating table.  You realize that it is an angel with it's wing cut off.  The same wings hanging in the Udo's office.  Apparently Udo likes to tease the angel even throwing a piece of ice at it from his drink when he talks to it.  The angel knows the film is still out there.  Unfazed by all the weirdness Norman sets out to find it.

Cigarette Burns is a creature feature.  THE END OF THE WORLD is the monster and it wants to be seen again.  It must be seen again.  It leads Norman on his journey to be found.  When an obstacle gets in his way a cigarette burn shows on the screen and the problem disappears which is especially helpful when you find yourself the star in some crazy European snuff film.  By the way a cigarette burn is what they call the black hole that appears on the screen in the theater during a movie that lets the projectionist know when its time to change the reel.  I thought I would just throw that important tidbit of information out anywhere instead of at the beginning of this essay where it belongs.

Now there is a whole subplot about Norman's dead wife and his strained relationship with her father but I don't want to talk about that.  What I want to talk about is the unintentional meaning I get from Cigarette Burns.  I get the feeling this movie is about the power and danger of imagery.  In Cigarette Burns it is the image of an angel being tortured on film that plays metaphor for some of today's extreme horror movies.  Horror makers seem to want to out due the next guy in the "F'ed up" department.  They linger on the atrocious moments of horror believing it's the sick out factor that makes a film scary or stand out. Too many movies do this and they are no longer remembered because Texas Chainsaw Massacre did it thirty years ago and did it better. Story takes a backseat to long projected scenes of rape and torture.  The movies become no longer fun to watch but just unpleasant experiences.  See Feast 2 or Martyrs for examples.....No, wait! Don't!  Is this what Carpenter or the writers were trying to say?  There is a scene where a torture porn is being filmed.  I don't think so but that's how I saw this movie.  It's my own personal interpretation.  See it for yourselves and draw your own conclusions.

The best thing about this movie is it's humor.  I'm not talking about clever one liners or comical situations.  Carpenter grew up on 1950's sci-fi.  Most of those films had aliens that were kept in the dark until the very end.  Those movies built up the expectations of what the monsters looked like but all too often they never lived up to the hype.  You would be watching some movie about people getting their faces sucked off by some unseen tentacled monster.  For two hours you would wait excited but dreading the moment the alien is revealed.  Finally at the climax a giant potato with lobster claws and a blond wig would emerge from the dark and you would have to laugh.  This is what you were so afraid of?  Well the same thing happens in Cigarette Burns.  There is no way in Heck-ola that Carpenter can show a film so scary that it could cause people to go insane.  He knows that.  So he builds THE END OF THE WORLD up through out the story.  You have to see it.  You don't know if you can handle it but you watch until the very end.  What Carpenter does is he shoots a bunch of crazy images of people screaming and clawing with red skies and stupid stuff everywhere and throws that up on to the screen at the end.  THE END OF THE WORLD looks like a bad pretentious student film from France.  When you think about it, its hilarious.  You better think about it or else.

Cigarette Burns is an episode from the Showtime series Masters of Horror.  Each episode is a stand alone mini horror movie directed by the legends of horror.  Most of them aren't very good.  Cigarette Burns is the best one but oddly enough in season two Carpenter makes the worst one titled Pro-life.  It had potential for being great but the movie looks rushed and unfinished with terrible acting and a unimpressive ending.  How is that possible?  They can't all be great I guess.

Cigarette Burn is great though.  If you love it tell your friends.  If you hate it tell your enemies.  At least there are no scenes of people tied to chairs screaming over and over again "No! Stop, please!  Why are you doing this?"  for thirty freakin minutes.  I'm looking at you Texas Chainsaw Massacre.  Oh, wait there is but that one doesn't count.