The correct order to watch the STAR WARS movies! 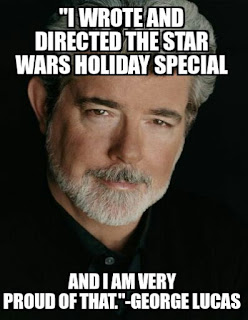 For some strange reason there seems to be profound confusion as to exactly what order you should watch all the STAR WARS movies.  Back in the old days this was not a problem.  It was simple.  You watched STAR WARS: A NEW HOPE followed by its sequel THE EMPIRE STRIKES BACK which naturally makes you want to see how this whole space opera ended in RETURN OF THE JEDI.  But then came the extremely unnecessary prequels and ruined a whole generation of Star Wars fans who just do not know any better.  The scary thing is that several generations are going to still be ruined as long as the nerdos out there insist that the prequels are canon.  Potential fans are turned away from the franchise because they started watching the odd and clunky prequels first.  I am here to stop that if possible.  I will show you the way and hopefully explain why you should watch the movies in this particular order.  Get ready for a long, rambling, incoherent rant on this one, folks.

The first movie you should watch is STAR WARS IV: A NEW HOPE.  Why?  This film perfectly introduces the audience to this new wonderful universe through the eyes of our hero Luke Skywalker.  We learn about the Empire and their main henchman Darth Vader.  The Force is introduced as well as Han Solo, Chewbacca and the Millennium Falcon.  Ben Kenobi tells us about Luke's father, Anakin Skywalker, who at one time was a Jedi Knight who was murdered by Darth Vader.  This gives Luke ambition to be a Jedi Knight and go after the evil jerk that betrayed and murdered his father.  How Obi-Wan explains his relationship with Luke's father is very important.  More on that later.  Luke is raised by his aunt and uncle which means one of them is related by blood to Anakin Skywalker.  More on that later too.

Next up is STAR WARS V: THE EMPIRE STRIKES BACK.  This in my opinion is the greatest movie ever made.  Yes, even better than CITIZEN KANE.  It is not my personal favorite in the franchise but it is such a great film that builds upon its predecessor expanding the universe discovering new worlds and characters that are all amazingly memorable to the point of becoming pop culture icons.  The greatest moment in cinematic history with Luke confronting Darth Vader only to discover that Vader is actually Luke's father.  How profound!  How tragic!  This revelation is so damaging that Luke commits suicide rather than join Vader only to survive by sheer luck falling into a disposal tube thingy and dropped out of Cloud City.  He has reached lower than low.  Also another important knowledge bomb was the explanation of the Force by our new friend Yoda who is the very embodiment of what a Jedi is.  It is very important to point out that Yoda does not use a lightsaber and even discourages Luke from taking his weapons when confronting the Darkside of the Force in the swamp.

RETURN OF THE JEDI is my personal favorite in the franchise.  I like seeing how long sagas end and how the characters have changed over time.  This one ended the best.  Here we see Luke can use the Force to his will yet Yoda tells him he is not a Jedi until he confronts Vader.  That is very important.  Just because you have the skills of a Jedi does not mean you have the mind or morals of a Jedi.  We also learn that Leia is Luke's sister.  Luke doesn't tell her right away.  Instead he asks her to tell him about her mother.  Why?  Luke then admits that he has no memory of his mother.  Leia was raised by their real mother and he wanted to know what she was like.  That is not what happens in the prequels.   Near the end Emperor Palpatine refers to Luke's lightsaber as a "Jedi weapon".  He is pointing out that only Jedi use lightsabers.  Vader used one because he was once a Jedi which made him unique.  In the end after dying, Anakin Skywalker appears next to Luke as an older man next to the ghost of Yoda and Obi-Wan to let Luke know that he was okay.

The next film to watch is of course STAR WARS:  THE FORCE AWAKENS.  This is a fun adventure that is a worthy successor to the trilogy. It may not be as perfect or as deep as the original "unspecialized" trilogy but it's missteps are easily outweighed by all the good.  It's worth repeated viewing in the theater.  The following sequels  would come next in the viewing order by what number they come in the episodes.  I am not sure what to think of the stand alone films.  If they are good watch them whenever.  If they are bad consider them fan fiction.  If they make a Bobba Fett movie that takes place after RETURN OF THE JEDI that automatically puts them in the fan fiction category since he died in the Sarlac Pit.

But what about the precious prequels?!!!!!!!

Easy.  You don't watch them.  They do not fit into the saga.  Worse yet they spoil the revelation that Vader is Luke's father, a crime worse than "specializing" the perfect trilogy.  The only reason Disney included the prequels was to sell more toys in my humble know nothing humble reasoning's.  Even though Disney has made the prequels official canon the stories contradict the originals therefore they are not canon.  In case you just missed it I wrote THE STAR WARS PREQUELS ARE NOT CANON!

A NEW HOPE sets the stage for the Star Wars Universe.  You have to pay close attention to everything that is said, implied, or not said.  I know that is confusing but blame George, not me.  Obi-Wan talks about meeting Anakin (Vader!) and he was already the best pilot in the galaxy and strong in the Force and Obi thought he could train him.  Here he is saying he met him in the Clone wars and it is implied that they were about the same age because they also became friends.  The important details that are left out (if the prequels are cannon) are that Anakin was just a child, who was a miracle birth, and Qui-Gon Jinn wanted him trained to be a Jedi.  You would think that Anakin was only a child strong in the Force and a miracle birth would get a mention at least once somewhere along the original saga.  The whole prophecy and Jedi not being allowed to love would also have come up at some point too.  Why is Qui-Gon Jinn training Obi-Wan when we learn that it was Yoda that trained Obi-Wan in EMPIRE?   A NEW HOPE says for a thousand generations the Jedi protected the Republic where the prequels state that it was only a thousand years.  That is a big whoops!

Either Aunt Beru is sister to Anakin or Uncle Owen is his brother.  They speak of Anakin as if they know him personally or at least who he was.  Even though these two characters are in the film briefly they give tremendous clues to Luke's family past.  Take this exchange between Aunt Beru and Uncle Owen.

Aunt Beru:  "Luke is not a farmer, Owen.  He is too much like his father."

Interesting.  In the prequels Beru and Owen meet Anakin briefly and afterward Anakin slaughters a village of Sandpeople, kids included.  Is Aunt Beru insinuating that Luke is too much like a violent murder?  If the prequels are canon she is.  That is not the original intent of that scene from Episode IV.  She knew Anakin before becoming Vader and that is how she remembers him.  Also why would Luke refer to them as Aunt Beru and Uncle Owen?  Why not just Mom and Dad?  What is the point of taking Luke who was an infant and tell him about his real father?  It makes no sense.  If everybody was concerned about keeping Luke a secret or not wanting him to follow in his father's footsteps why tell him his real father was Anakin Skywalker?  The smart thing to do would be to let Luke think he was the son of a couple of farmers.  That way Luke will not have the expectation of following in the greatness of his father's footsteps.

The prequels tell a story we know the ending.  We already saw it.  The story of Anakin Skywalker was told through the trials and ordeals Luke faced to become a Jedi.  It was that realization that he was walking in his fathers footsteps on his way to the Darkside that saved him.  Luke Skywalker became a Jedi the moment he dropped his lightsaber.  He chose to trust in good and not hate to get resolve.  In the prequels the council decides.  That's not the way of the Force.  You become a Jedi by your choices and not by the decisions of others.

The prequels ruin everything.  Now Vader is not special because the Sith (Whoever they are.) use lightsabers including Palpatine and have the word "Darth" put at the front of their new names.  The Force is no longer spritual but physical being reduced to microscopic organisms.  If that was the case they would never have called it the Force in the first place.  How does Anakin Skywalker show up at the end of RETURN OF THE JEDI when it is established in REVENGE OF THE SITH that it requires super secret training to come back as a ghost?

Remember that one time when Vader Force choked that commander guy for making fun of Vader's reliance on an ancient religion that produced no results in obtaining the secret plans to the Death Star?  Basically that scene lets us know that by the time Vader was being trained to be a Jedi he was one of the last.  People no longer believed in the Force.  Jedi were becoming myth.  There weren't a bunch of Jedi's with a big temple where everyone knew about them.  How could a commander at his age not know about the Jedi who fought so prominently making strategic decisions in the Clone Wars?

You can see how the prequels have changed the intent of many scenes in the original trilogy.  I could go on and on.  When Obi-Wan Kenobi says "So was I when you trained me" to Yoda he is no longer telling the audience that Yoda was the one who trained him to be a Jedi.  Now he is saying "When I was a child I was taught by you the ways of the Force because I had midichlorians in my blood but when I got older I was trained by Qui-Gon Jinn whoever that was."  It's makes a great story bland and that is why the prequels cannot not be part of the saga.  Search your feelings.  You know that it is true.