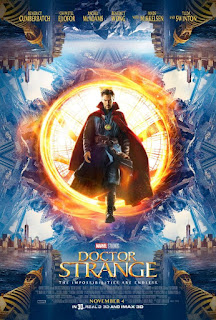 I have to admit that I didn't expect a lot from DOCTOR STRANGE.  ANOTHER ORIGIN STORY?!!!  Is it really necessary to do another story about the beginnings of another super hero?  I know next to nothing about Doctor Strange but I don't feel the need to have my hand held and explained how he came to be even with all the magic mumbo-jumbo.  I have seen enough to know how this whole super hero thing works.  The whole movie looked like it was going to be some kind of INCEPTION knock-off.  Now that I have seen the movie I can say that I was wrong.  Not only is DOCTOR STRANGE good, it's one of Marvel's best!

Dr. Strange is one of the best surgeons in the world.  He is a man of great arrogance fully aware of how much smarter he is than everyone else around him.  Not a bad guy but he has a couple of large character flaws.  After a car wreck of his own doing, Strange finds himself no longer able to be a surgeon due to the crippling of his hands.  Humbled in body but not in mind, Strange's desperation to get his former life back leads him to look into possible magic remedies.  This journey leads him to the discovery that there is real magic in the universe and there are unseen threats that will use magic to bring destruction to our world.

DOCTOR STRANGE opens our minds to the Cosmic side of the Marvel Cinematic Universe.  There is not just other countless universes but other dimensions and realms too.  All of it is connected.  Dr. Strange who considered himself the biggest man in the world, is shown that he is just a small part of a much larger reality.  That doesn't make him and his existence meaningless but it does mean that everyone has value.  Everyone is important and worth fighting for.  Overtime Dr. Strange learns to use magic of the universe to help others instead of himself.  He becomes a Master of magic but insists that you still call him Doctor.

The film only gets better and better.  At no point does the story get bogged down with boring exposition or a pointless love story that will not last into the certain sequel.  This is an origin story after all.  We know how origin stories progress.   We know that we will see set ups to future films in the franchise.  We should be bored but we are most definitely not.  Part of that reason is Benedict Cumberbatch is perfect as the title character.  Dr. Strange is rich, smart and arrogant like Tony Stark only not as funny or likable.  There is some deep complexity to his character.  He loves himself more than anyone and this blinds him to why he can't build a strong relationships with others.  He does care for his patients but he likes the glory a bit more.  You can't help but get involved of his story as the prideful doctor the humbled but super powered super hero.

A big positive to this film and all Marvel films is that DOCTOR is part of a much larger story.  While watching DOCTOR STRANGE you have to wonder where this is happening in the MCU.  How are they going to use this character in the Infinite War?  Are any Avengers going to show up?  What is going on in the MCU while this story is going on?  The idea of all these movies sharing the same universe helps boost interest even in the most lackluster Marvel movie.

Magic gives more room for imagination.  The fight scenes are more creative because magic is being used in a creative way.  There isn't just a bunch of shooting and punching.  In fact there is an almost subversive nature with the use of magic in the fights.  At the end the bad guys had pretty much won but thanks to Dr. Strange's willingness to break the rules of magic he is able to rewind time with the Time Stone and save everyone and defeat the bad guys while time reverses all around them.  There is time travel and dimension bending and out of body experiences that are used in the battles between good and evil.  Imagination is used the right way.  In the Marvel Cinematic Universe we haven't seen these things before except for the Quantum Realm in ANT-MAN.  You do see the Quantum Realm briefly in DOCTOR STRANGE.

DOCTOR STRANGE is a fast paced eye opening experience.  It is a welcome addition to the MCU and a course correction from the BATMAN VS. SUPERMAN: DAWN OF JUSTICE ripoff CAPTAIN AMERICA; CIVIL WAR which was somewhat of a disappointment.  Hopefully DOCTOR is the last of these origin stories.  The formula needs to be changed to tell a story of a newly introduced character.  PUNISHER: WAR ZONE is the best example of that.  My only real complaint for DOCTOR is that the some of the fight scenes are too heavily edited at times.  Other than that this movie will surpass the most highest expectations.  Go see it and be amazed!