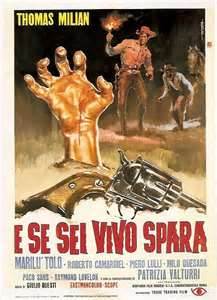 With DJANGO UNCHAINED coming out soon I figured I would give you guys a review of a "DJANGO" film.  Director Guilio  Questi's DJANGO KILL! is not a true "DJANGO" film.  To cash in on Sergio Corbucci's popular film the studios or whoever decided to change the title and add the name "DJANGO" to the film so fans of the original could flock to the theaters and scream "WTF" at the screen.  I guess in Italy there is no such thing as copy right infringement.  You could call your movie whatever you want with the names of other characters from other movies with the same likeness and there is nothing anyone can do about it.  In the case of films like DJANGO and SARTANA there are several films with the popular characters' names in the titles but have nothing to do with the originals.  It is kind of a neat experiment to see the many different versions of the same film but from other directors.  DJANGO UNCHAINED seems to be more like an homage to those films rather than the original DJANGO even though Franco Nero makes an apperance.  Before you cry 'Foul' remember that Sergio Leone's best film (In my opinion) A FIST FULL OF DOLLARS is a complete ripoff of YOJIMBO.  Of course you all knew that to begin with.  I was just trying to sound smart.

Thomas Milian stars as some guy who is half Mexican and half white type person.  After helping a gang of outlaws rob a gold shipment he discovers that they are all a bunch of racist bastards and decide to kill all the Mexican robbers that helped with the heist including Thomas.  The Mexican bandits are forced to dig there own graves and then are massacred and buried.  Thomas is the only survivor.  He is helped by two Native Americans who think he came back from the dead.  They nurse him back to health and create gold bullets for Thomas to get revenge with.  The bandits however are murdered themselves after entering a town that is more corrupt than they are.  A couple of the town leaders discover the bandits have gold and they convince the town to string them all up.  Thomas shows up and guns down the leader of the gang who was the only survivor from the town's lynch mob.  With nothing better to do Thomas just moves about the town staying one night each with the three factions who are tryng to get the gold.  There is the hotel owner and preacher and a gang leader who has a whole gang of homosexual men who are dressed in black fetish cowboy outfits.  I think it is safe to say that DJANGO KILL is a little homophobic.  Probably should times that last sentence by 100.  Is Thomas's character after the gold?  I really don't know.

After the revenge part of the film is over DJANGO KILL! kind of plays out like some kind of morality story about the destructive power of greed.  Thomas's character seems like nothing more than an observer to the events that lead to everyones downfall.  He does get involved at the end but just to kill the gang leader and his gang.  Everyone else dies by there own plans to keep the gold for themselves.  The movie feels like it meanders about unsure of what kind of film it wants to be.  Is it a revenge film?  Is it a get the gold film?  Meh, its whatever you care for it to be.  If you care at all.

DJANGO KILL! is without a doubt the most bizarre and somewhat gruesome film to come out of the Italian Western genre.  Questi's experiences in war influenced a lot of the death and grotesque imagery you see in the film.  There is a guy that gets scalped, and the bandit leader who is severely wounded by Thomas is torn apart by men digging the golden bullets out of his wounds like greedy zombies.  There is a strong focus on death in the film.  But there is also the strange inclusion of the the gay fetish cowboy gang and the scene of Thomas tied up looking like Christ on the cross being tortured by separate footage of bats, armadillos and iguanas.  The movie implies that they are torturing him but you never see any of the animals touch him.  The silly stuff makes the whole film look stupid like a very violent episode of the old sixties Batman show.  The director is trying to make something more meaningful with all the dark/strange scenes and imagery hoping the audience will think more instead of just watch.  This is a thinking mans western.  The problem is that despite a great performance from Thomas Milian the story is rather boring.  I found myself disinterested with the main characters and never felt like Thomas was a meaningful badass.

The thing that bothered me most about DJANGO KILL!  is the gun play.  A really good western will have those moments of badass where the hero does something super cool with his gun like Eastwood gunning down four guys in three seconds.  You get the sense that he really is that good with a real gun and that he shot real bullets from that gun judging by how believable the bad guys fell over and died.  The pistols fired in DJANGO KILL! however come off more like toy guns with blanks.  Every single character fires wildly not bothering to aim with seemingly endless shots fired from six shooters.  There seems to be no consequence to the guns.  Men run around out in the open unarmed for several seconds while several guns are fired at them from a few feet away.  The stranger at one point is shooting at the Cowboy Fetish Gang from a window.  The villains are out in the open.  Not one of them is killed or even wounded.  What was he shooting at then?  One of them was even laying on the ground for some reason making him an even bigger target who was also army crawling backwards!  I could even shoot that!  It was a mindless pointless scene that did nothing but extend the running time of the film.  Boring.