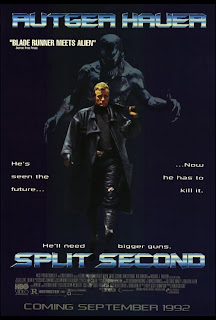 Rutger Hauer out wrestles the Devil, punches through his chest cavity, pulls his heart out and while its still beating shoots it with a cannon he uses as a sidearm.  That's all I really need to say to sell this film, isn't it?  That moment in the finale is one of the most badass things ever put to film. I could end this review right now and you would be dying to see this movie.   Oh, did I mention that this review has spoilers in it?  Whoops.

Rutger Hauer plays Rutger Hauer a smoking coffee drinking high on sugar police detective that runs around dressed like he just entered the MATRIX.  He has gone a little crazy because his partner was killed in front of him and he doesn't know by who or how.  But he has a psychic connection to the killer and he is able to tell where he is going to strike next.(sometimes)  Hauer gets a new partner who seems like an up tight prick named Dick.  Dick is really smart but too green for Hauer to like.  Eventually though by way of a close encounter with the beast Dick becomes as crazy as Hauer and the two start working together to electrocute, flash bang and shotgun to pieces the beast that may be a mutant horoscope reading serial killer or the Devil.  Who freakin knows?

The creature in this film isn't fully explained.  At first Hauer thinks the creature is just a man.  When Hauer shows up at a night club the creature is able to kill a woman in a bathroom and then walk through a crowd of people out the door leaving a trail of blood behind and nobody sees anything.  THE DAMN THING IS EIGHT FEET TALL!  It is intelligent but when you see it it is some kind of alien or monster.  It plays mind games with Hauer taunting him to find him.  The creature leaves behind weird astrological symbols and from that crapola Dick figures that they might just be dealing with the Devil himself.  The movie doesn't come out and say what or who the creature is.  I say its the Devil because the movie insinuates it.

As a whole SPLIT SECOND fits in nicely between LETHAL WEAPON and PREDATOR.  It is an action movie with a strong element of horror and science fiction.  Even though Hauer doesn't run around and shoot a bunch of people or walk into a grocery store to buy food for his pet pigeons and has to kick the crap out of a bunch of thugs robbing the joint this movie still kicks a lot of ass.  There are some good lines, funny moments, nice future is about to go to crap atmosphere and BIG GUNS.  SPLIT SECOND is a different kind of action movie but it still has a ton of the cliches from other badass cop movies. He says the line "I work alone" and his apartment is a complete trash hole.  Hauer himself really keeps you glued to the t.v..  This is his best performance ever and he seems to be playing himself.  Or at least this is how I think he would act in real life.  He is way over the top on this one, folks.  Watch out is all I am saying.

Also I find it strange that the song NIGHTS IN WHITE SATIN by the Moody Blues is played throughout the film.  That's an odd choice for a movie like this.  Maybe Rob Zombie was paying homage to SPLIT SECOND when he put the song at the beginning of HALLOWEEN 2.  Yea, I bet that is why he did it.  Its too bad that this movie is out of print.  I had to buy mine for eighty bucks and it is full screen.  Oh, I am sure if I check eBay or something that I could find one for five bucks.  That's the story of my life, peoples.  They only go down in price after I buy them.  Screw you, Internet!  Hopefully one day we will get this sucker on blu-ray.  Lets get SPLIT SECOND on Criterion.  That would be awesome.  Maybe that would happen if Rutger Hauer was a judge on AMERICAN IDOL.  I might have to hate him though if he did that.  Its not worth it.  I will just wait, thank you.

ICHI THE KILLER: A LOVE STORY? 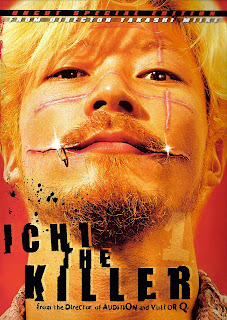 What kind of crap am I watching?  There is a lot of stuff going on in this crazy mad comic book (or Manga for the nerd-os out there) movie.  ICHI THE KILLER has a great number of cool quirky characters and a lot of convoluted story to try and figure out.  Also there is a lot of semen in this movie.  The flippin title of the damn flippin movie forms in a puddle of semen.  Probably the grossest title sequence ever.  Yeah, this isn't the kind of movie you watch with your girlfriend unless she is super cool.  I just want to focus this review on the two main characters of the film.  You see that guy on the cover there with his face all cut up and the title ICHI THE KILLER placed out front letting us know that he is Ichi the Killer?  That's not Ichi!

That crazy mo-fo you see prominently displayed on the poster is Kakihara.  He is a masochist.  He is also in the Yakuza.  His boss Anjo is missing and Kakihara searches for him in the gangster underworld.  Kakihara loves to suffer and Anjo is the only guy who can inflict the right kind of pain for his pleasure.  Its not necessarily a love thing between men though you can certainly see it that way.  With Kakihara its about the pain itself.  That is his sex.  As the story continues he learns that Ichi killed his boss so naturally Kakihara wants revenge.  Kakihara is not someone you are going to forget any time soon.  Maybe that is because he can blow smoke out the slits in his cheeks.  There are rings in the corners of his mouth that keeps his lower jaw connected to his face.  You do get to see him remove the rings.  Its kind of cool.  Just don't punch him in the face.

Now Ichi is kind of on the opposite end of the "F'd Up Spectrum".  Ichi is a young twenty something who is constantly battling his sadistic sexual urges.  Ichi is a 100% sadist.  He knows its wrong to hurt and kill but it is the only way he can be sexually fulfilled.   Ewwwww......He can't stand pain and has a tendency to cry a lot.  In fact he runs around in this rubber armored suit for protection that has axe blades that pop out the back of his heels like some kind of sick messed up super hero.  He is our hero and he oddly enough is a sympathetic character.  He suffers from a real moral dilemma that isn't (necessarily) his fault.  There is an old man that is pulling Ichi strings.  His name is Jijii.  Jijii uses Ichi to exact his revenge (for some reason) on Kakihara and his gang.  He implanted Ichi's sadistic sexual urges through some kind of hypnosis mumbo-jumbo.  He wanted Ichi to be some kind of super extreme killer that can chop people up into terrible CGI but he didn't expect Ichi to "get off" from it.

So basically throughout the course of the film Kakihara realizes how sadistic and brutal Ichi really is.  People get messed up all over the place in this movie.  We are talking blood and guts hanging from the ceiling messed up.  By the end Kakihara admires Ichi and wants to have this huge one on one battle.  The two are destined to be together in some kind of perverse love story.  Kakihara would like nothing better than to get chopped to pieces by Ichi's axe blades.  The two weirdos have their epic battle ( Romantic moment?) on top of this building.  Now is the time for these two to get their bloody messy freak on.  Like my first foray into sex however the whole final battle is a complete disaster.  Ichi completely falls apart and starts crying.  Not knowing what to do next, Kakihara imagines getting killed by Ichi and throws himself off the building laughing about how wonderful it is to be butchered by Ichi.  The Yakuza leader finds himself in purgatory (I think) because he probably would enjoy Hell too much.  So its kind of like the man not being able to "get it up" and the girl having to "finish the job" herself.  Its kind of funny when you think about it.  I am not sure really what the heckola is going on at the end.  Your guess is as good as mine.  What is with the freakin crow?

Takashi Miike is one of those directors that does whatever he wants.  He is highly experimental with the results being a mixed bag of "meh" to "Wow! That was kind of neat".  His films are heavily flawed and sometimes are too slow but they are always interesting because you see things you have never seen before.  Sometimes its weird camera angles, or misdirection, or music cues that start at random spots in a scene that  make no sense.  In ICHI THE KILLER one of my favorite scenes is Ichi talking in a room with Jijii.  The two are never shown in the same frame.  You just have two back and forth shots between the two characters as they are talking.  Ichi is clearly looking at Jijii off frame.  At one point Jijii tosses a bag of pills at Ichi that he catches.  Distraught Ichi walks out the door behind him with the camera following with a pan shot.  Immediately after Ichi walks out the apartment door Jijii comes in from the very door that Ichi left without the camera cutting away.  It was done in one shot.  So Jijii wasn't in the room while they were having the conversation.  WHO THREW THE FREAKIN BAG?  See?  The whole scene was a misdirection.  It contradicts itself on purpose.  That is why I love Miike.  I won't watch all of his films but I love that he is unbound by the rules.  Film is art and anything is possible in art.

I know I shouldn't like this film but I can't help it.  ICHI THE KILLER is amazing.  It's F'ed up in the right way.  Every filmmaker out there should watch this and more of Miike's work.  It definitely expands the mind and gives more ideas on what can be done.  ICHI THE KILLER is probably his best work yet though I am no expert.  I have a few of his films and enjoyed them all but they definitely are not for everybody.  Each one has little moments of brilliance that can be appreciated if you look at film as art and not "lets tell a story as realistically as possible".  There is a lot of ugliness in this film and I am not talking about all the horrible CGI in the film.  Cruelty towards women runs rampant.  They get beat, raped, sliced boobs and fountains of blood spraying from their necks.  Its not the kind of thing I like to see happen to women yet IT HAPPENS IN ALMOST EVERY MOVIE I OWN!  (What can I say?  I own a lot of horror movies.)  But in its defense it does serve the story.  Yeesh!  I need to start watching  more comedies or feel good movies with talking puppies or something.  Maybe I should go see HOP and if I survive that I can do a review on it.

In closing I ask only one question.  Does half this movie look like it was soaked in urine?

Just trying to keep it classy for the Internet.