THE RAID 2: Uncompromising and BLOODY brilliant! 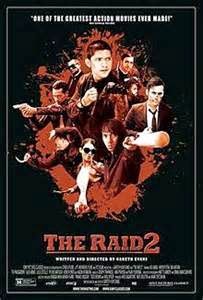 I know somebody else has already said it but THE RAID 2 is THE GODFATHER 2 of action films.  This is a sequel that builds upon the story of the first one yet destroys the formula set by the first one.  It is a film that does what it wants and it will take its time doing so.  A world is created and this film will explore it.  THE RAID 2 merges bloody action with art house style film making.  It is beautiful and ugly at the same time.  By the end of the film you will dwell on what you have just witnessed and either love it for it's ambition or think that the original was better for it's simplicity.  Either way THE RAID 2 will leave an impression on you and make you want to stay away from hammers for awhile.

Remember when DIE HARD came out back in the day?  Remember the sequel and the news of the possible sequels?  They were all about continuing the formula established by the original.  One guy against a group of bad guys that have taken over a building large enough for our hero to cause shenanigans in and not get caught.  DIE HARD 2 took place in an airport instead of a skyscraper.  Part 3 was suppose to take place on a boat but SPEED 2 had beat them to that idea.  UNDER SIEGE was on a boat too and part 2 was on a train.  SUDDEN DEATH took place in a hockey arena.  You get the idea.  The American action film had limited itself to the DIE HARD formula and it showed no signs of coming up with anything new.  These were action movies with location gimmicks.  THE RAID 2 says "Sucks to all that" and comes up with something new.  We are given a real story with characters that we take notice of and want to know more about.  The film takes detours showing us a part of a supporting character's story to enrich the cinematic world for the viewer and then kill that character off just because the movie can.  Sympathy is given to some of the villains as well as our hero.  The bad guys have their own stories to tell.  The movie doesn't limit itself to just our hero's story.

Some of the most impressively choreographed and filmed fights are put to screen.  These fights are fast and brutal.  You have to marvel at how many people didn't die during the making of THE RAID 2.  There is a lot of blood to be spilt but the film never fully relies on the action.  Some of the characters are so well developed that you are not sure what the outcome of each fight is going to be.  In particular there is a fight between our hero and a professional killer in a kitchen that is so intense you are certain that the good guy is probably going to die.  I never felt like that in an action movie before.  In other action films we are assured the predictability of a fight because we know the hero can never lose.  There really isn't much intensity to Steven Segal kicking the crap out of some thug because we know he will never lose.  With THE RAID 2 we just don't know how it all will end.

I will say this that there is some jittery camera work during some of the fight scenes which can be distracting and I wasn't always sure what was going on in the story but THE RAID 2 still is probably the best movie for 2014 in my humble opinion.  It is a rare kind of film that somehow was not overly cut down to a quicker more hip movie to appeal to mainstream audiences unlike the butchered job we were given for THE GOOD, THE BAD AND THE WEIRD and SUKIYAKI WESTERN DJANGO.

Apparently there is an American remake being made for THE RAID.  It will be interesting to see if they make a sequel to that in a few years.  How will they make it?  Will they learn from what THE RAID 2 has done or will they simply repeat history?  I will take a guess and say the American THE RAID 2 will take place in a mall run by gangsters instead of a rundown apartment building.  Let us see if I am right, folks.  Batter up!

Jason
Posted by Jason at 1:57 AM No comments: