YOU'RE NEXT: A perfect slasher film? 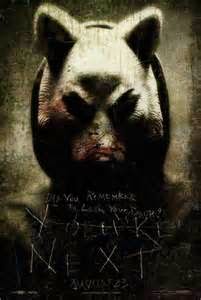 YOU'RE NEXT goes to the next level of horror that most horror movie makers do not even know how to get to.  It is the last of a trilogy of popular horror films where masked individuals invade a home and terrorize the family or occupants inside.  First came THE STRANGERS which had its moments but otherwise was rather predictable and somewhat of a let down.  Five years later (Really?  Five years?  Time flies by doesn't it.) came THE PURGE which was awesome.  A few months later came a little known film that was so well made that despite a low budget and a cast of relative unknowns made its way to theaters.  YOU'RE NEXT is the best of the bunch.  I really do think this is a perfect slasher film.  It has some iconic villain masks, realistic gore, a clever script with a great sense of humor and the movie is pretty darn scary too.

A family get together is violently interrupted by a trio of masked crazy people laying siege to the house killing everyone inside one by one.  Unfortunately for the trio, one of them fights back.  That is all you need to know.

YOU'RE NEXT may not be the scariest film ever made but it does have its moments.  What the film does well is give you a cast of characters that you genuinely care for.  That is very important because when the horror stuff starts happening you are invested in everyone's well being.  The children are all grown up and they have brought their significant others to this little family get together out in the middle of nowhere.  We see how they get along (Or not get along.) and we form some very uninformed opinions on them.  We see at the end just how uniformed our opinions were.  Weaved through the mayhem is a little bit of wit that comes out in small moments.  One of the characters may say something funny but you may have missed it because you are too worried about what is going on in the immediate situation.  You really have to pay attention because the movie isn't going to slow down and point out the funny parts.  In other words this movie expects more from its audience.  It expects you to be engaged and it won't insult you. 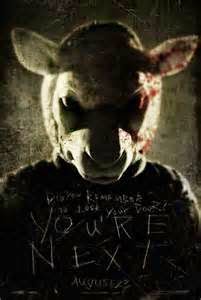 This is not your typical home invasion movie.  Where other horror movies fall short is giving the audience someone strong to root for.  We need a hero.  YOU'RE NEXT gives a strong heroine (Erin played by Sharni Vinson.) who fights back. This movie is too well written to have her just crawl into a corner and scream like most other horror movies out there.  When the bad guys kill she kills back.  We need more heroes and heroines in our horror films.  We franchise the villains when we should be franchising the heroes.

The blood and gore effects are all practical.  You will never be disappointed in the work by special effects wizard Mike Strain and everyone at his company FANTASY CREATIONS FX.  The gore doesn't reach cartoon levels to the point you can't believe what is going on.  The violence is visceral and as close to real as possible....Well maybe not the blender part but it was still pretty cool.

People probably thought this was just another "Guys in masks committing a home invasion"  movie.  I think that is why the general audience stayed away.  Still the marketing campaign was genius with the iconic white animal masks appearing on other movie's posters and at other movie's panels at Comic-con.  They had fun with it but to no avail.  The movie is simple but very profound in the Slasher genre if you pay attention to the details.  You may think it at first but by the end you will realize that this isn't the same slasher movie you have seen before.  This movie plays to a different beat.  Things happen unexpectedly whereas movies like THE STRANGERS follow the same old tropes where the villains are always one step ahead of our protagonists and they always seem to be in the right place at the right time.  The masked killers of YOU'RE NEXT are not so lucky. 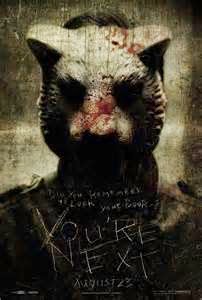 YOU'RE NEXT had a good amount of success for being a low budget film.  I still think it deserves more attention than it has received.  There is a story told that doesn't insult the audience by pulling it's punches to set up a sequel.  You may go into this film with high expectations and be put off by how simple the concept is or you may have low expectations and be caught off guard at the clever script and effective use of blood.  Either way you will be entertained.