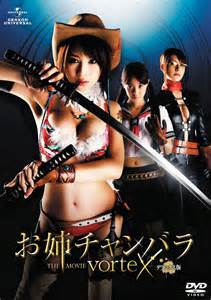 CHANBARA BEAUTY: THE MOVIE-VORTEX has no nudity.  I know that is the first thing you would be wondering so I just thought I would get that little fact out of the way.  This is a video game movie that apparently is a remake of the ONECHANBARA movie.  It is not a sequel.  I guess someone saw ONECHANBARA and decided that they could make the same movie only with less story and more shots of fake cartoon blood splattering the camera lens.

Aya (Yu Tejima) is a bikini wearing, double-samurai sword wielding cowgirl that roams the zombie filled wastelands with her step-sister Saki killing the undead because they haven't got anything better to do.  This woman shows up and says her name is Misery and she can help find the evil woman, Homiko (I think that was her name) who is responsible for all the zombie nonsense going on.  Turns out Misery is actually Homiko and she needed help (supposedly) kidnapping some little girl who has special blood.  Saki betrays Aya and helps Homiko with the promise that Homiko can bring back her dead parents.

You would think that a movie about a bikini wearing, double samurai sword wielding cowgirl would be an extremely entertaining movie with extremely striking visuals.  Sadly  CHANBARA BEAUTY: THE MOVIE-VORTEX is nothing but an eye sore.  Every aspect of this film seems like a step down from the original with the exception of Yu Tejima playing the new Aya.  Visually CHANBARA is uglier than the first.  Every set is the same as the last.  The barely there story wades through from scene to scene with little change in the scenery.  It looks like the whole movie was filmed in the same abandoned school/warehouse/apartement building.  It is all bland, bleak, boring and uninspired.  The visual effects are just a bunch of bright computer blurs and distortions that add little energy to a movie that is about two people walking from point A to point B.

At times the fight scenes begin to muster some enthusiasm for the film.  Aya kicking zombie butt is a blast at first but they keep throwing blood at the screen over and over again to the point that you never ever want to see another movie that does that particular gag ever again.  The end fight between Aya and Homiko is repetitious  at best and doesn't seem to want to ever end.  The fight scenes never quite hit the hyper kinetic energy you get from a really good Japanese action film.  A few good examples of one that succeed in that are VERSUS, DEATH TRANCE and the HARD REVENGE MILLY movies.

CHANBARA BEAUTY WHATEVER is at best a forgettable film.  How ironic.  I don't believe the choices made on every level of production were correct.  It would be nice if they had a solid interesting story that had some heart to it.  At least the original made you care for the characters which is a strange thing to say about a movie with an obviously silly premise.  There is this really hot gun toting woman who you would think would help Aya like she did in the first one but instead the choice was made to make this annoying guy who does nothing but annoy and not get killed (when clearly he did get eaten by a bunch of zombies but he shows up and acts like it is no big deal) be Aya's tag along.  He is the film's Jar-Jar.

I think the guys who made this movie didn't care about anything except the attractiveness of the lead character.  Everything else production-wise was added in as an after thought.  If you have a fetish for Japanese women in bikinis and cowboy hats fighting zombies with their double samurai swords then this is the movie for you.  But I will assure you that after watching CHANBARA BEAUTY: THE MOVIE-VORTEX you will have that fetish no longer.  Though not the worst or the most tasteless this movie should have been at least memorable.  Maybe the next remake will be better.  Hope for a remake, folks because a sequel to this movie would be a flashy, fake blood on the screen with a giant glowing "X" across the screen soul sucking blandfest.