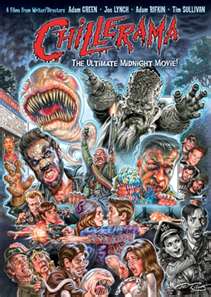 Its the final night of a closing drive-in theater.  To celebrate three (technically four) extremely rare films are being shown for the first time in decades.  These films are so rare that only one copy of each exists.  Movie enthusiasts pack the drive-in eager to see them.  Unfortunately for them  one of the drive-in workers decided to try and corpse rape his dead and buried wife who just happens to be a zombie.  After getting his "johnson" mauled by the undead the worker goes to work and whacks off his now undead spunk into the popcorn butter which is the distributed to the audience.  Zombies happen.

What we have here is an anthology of short films representing different kinds of monster movies from the past.  The titles are kind of funny.  You have WADZILLA,  I WAS  A TEENAGE WEREBEAR, and DIARY OF ANNE FRANKENSTEIN.  Oh, and lets not forget DEFECATION!  Actually lets forget that last one.

WADZILLA is about a giant sperm that eats everybody and tries to mate with the statue of liberty.  This one was kind of funny.  I like the main character.  He is a short nerdy guy who can only produce one sperm.  Ray Wise is his doctor and he gives him a experimental drug that makes his one sperm a giant monster.  WADZILLA has its moments  I think I relate to the humor a little bit just because I have balls and that is what this story is all about.  The ending is funny when the monster is exploded and everyone gets covered in goo.  His new girlfriend is drenched and she wants to kiss him at the end but he doesn't really want to because you know why.  Not too bad.

I WAS A TEENAGE WEREBEAR is like a sixties California beach movie.  The title is pretty creative and the story about a young man coming to terms with his homosexuality could have been great but it ends up being the weaker entry due to it being a musical.  Nice try.  You do get to see a guy killed by being impaled by a "red rocket" though.  Why would I want to see that?  That is just gross.  The story is about a young man who is bit on the butt by a gay tough guy who turns into a burly bear man in leather fetish gear.  Our hero becomes a werebear too but unlike his new friends he doesn't want to kill anyone.  Now he has to stop them from eating party goers or something like that.  I just thought this one could have been better.

DIARY OF ANNE FRANKENSTEIN is the funniest one of all.  The best thing about it is that the humor relies less on toilet balls humor and more on clever and unexpected moments.  It is definitely the best story.  Hitler finds Anne Frank and her family and discovers they have a diary from Frankenstein who was there relative.  He takes it a creates a Jewish Frankenstein monster played by Kane Hodder.  I really liked this one.  It is more creative and has the most laughs.  It is filmed in black and white and does a good job of looking like a classic Universal Frankenstein film.  Good job.

The story taking place at the drive-in is kind of good but the whole place gets overrun with zombies that rape you to death.  That is a little overboard if you ask me.  There is one awesome moment when the owner of the drive-in starts blasting away the horn-balls of the undead with a shotgun quoting popular movie lines from better movies.  That was cool.  Other than that CHILLERAMA is a mix bag of funny, unfunny and extremely tasteless.  If you found BEAVIS AND BUTT-HEAD DOES AMERICA to be an enjoyable experience then you might want to give this one a try.  But if you like a little more thought in your humor then you won't be missing much by skipping this one.  I really wanted to like CHILLERAMA.  I could tell the makers were having fun with this one but it was just too immature for my delicate tastes.  It was like they were paying homage to poop jokes disguised as a bow to older exploitation films.  Less balls and dongs please.

Before I go I just want to add that I will never look at the Statue Of Liberty the same way again.  Thanks CHILLERAMA.  No, seriously.  I mean it. 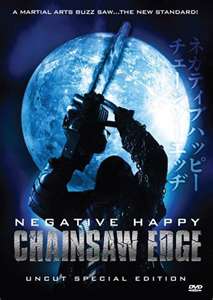 Yes, it is true.  In this world there exists a movie called NEGATIVE HAPPY CHAINSAW EDGE.  I will give you one guess as to the country's origin that this movie was made in.  I found this one on THE NETFLIX and started watching it immediately knowing nothing about it.  I am just going to assume this movie is based off a Japanese comic book.  I can't be too sure since there isn't any tentacle rape going on in this movie.  But there are a ton of weird ideas play-doughed together to form a story about young love.  This is not a horror movie despite the chainsaw wielding maniac on the poster.  This is a love story.  Yeah, I guess the best way to get me to watch a love story is to put a chainsaw wielding maniac in it with a lot of kung-fu crap.  SOLD!

Yosuki (I'm not even sure I am spelling his name right) is a young man in high school who chances upon a girl his age named Eri who every night must fight a chainsaw wielding maniac who comes from the moon.  I am not sure if he really comes from the moon.  I am just assuming that.  Hey, anything is possible in Japan.  The guy looks like he just escaped from a Resident Evil game.  Seeing a chance to be greater than his friend Noto who died in a bike wreck, Yosuki tries his best to help Eri fight the monster each and every night.  He hopes to top Noto with a greater more spectacular death.  Noto was always better and cooler than Yosuki.  The weapons chosen are always different.  She will use a sword or throwing knives but then she will fight the monster with a golf club or umbrella for some reason.  Don't ask me why.  I have no idea.  The monster is defeated every night but it gets away and never dies.

NHCE is creative and fun and even a little touching.  Even though it is a weird movie with weird moments and weird characters it all feels natural to the story  It all belongs.  I think the only problem I have is that the energy the movie has doesn't continue throughout the entire film.  Not sure where the movie is going with no resolution in sight with repetitive scenes of hanging around waiting for a monster to show slows the film down slightly.  The focus of the story is on two teens dealing with their own personal demons in different forms  (Noto and Chainsaw Wielding Maniac) and along the way they fall in love.  There is some big special effects fight scenes with the whole flying around in the air craziness you would expect from the land of the rising sun.  It is all good but there is only a few of these scenes.  The rest is all character development stuff.  But that is good too.

NEGATIVE HAPPY CHAINSAW EDGE was a nice surprise.  If you want to see something different that your nerd friends don't know about yet then I suggest watching this one.  Your friends will think you are the coolest when you tell them about it.  After that get new friends because your old friends aren't good enough for you anymore, you culturally superior bastard.