THE MAN WHO KILLED HITLER AND THEN THE BIGFOOT. Great Title Equals Great Film! 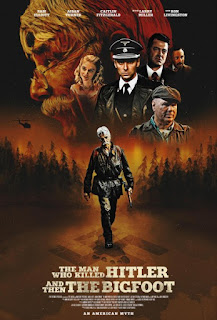 THE MAN WHO KILLED HITLER AND THEN THE BIGFOOT (MHB from here on out, folks.) is a film that needs to be appreciated and admired for what it is and thanked for what it is not.  While the title pretty much tells you what happens in the film it does not tell you what the film is really about.  I believe you will be pleasantly surprised to find a slower paced and emotionally layered film instead of a zany hodgepodge of craziness the title may lead some to imagine.  No, this is not some kind of stupid nonsense created to surf the wave of shocking success the SHARKNADO movies created.  MHB could have 'LOL'd itself into obscurity along with so many other absurd titles meant to achieve quick easy views based on how extremely crazy the names are such as SHARKTOPUS, FRANKENFISH, 3-HEADED SHARK ATTACK, 5-HEADED SHARK ATTACK, 6-HEADED SHARK ATTACK.  You get the idea.  Its all stupid.  MHB is the opposite of all that jazz.  This is a film that not only earns it's title but your respect too.

Sam Elliot was meant for this lead role as Calvin Barr a man that lives his life in quiet sad obscurity carrying the unseen burden of remembering the past. No one knows that back in the day that he killed Hitler.  Calvin never speaks of it except for once in a moment of weakness to his brother the barber played by the wonderful Larry Miller who usually plays sarcastic jerk characters.  Calvin only mentions that he killed a man in the war still keeping the secret of the man's identity.  Being a man of great intelligence and skill during World War II made Calvin the prime candidate to hunt down and kill Hitler behind enemy lines.  But killing Hitler brought him no peace or pride nor fame.  The war didn't end.  Nothing was accomplished.  Instead Calvin suffered loss.  He lost the opportunity to live the life he wanted with the woman he loved.  Now he just gets by still living in the past never having the motivation to move on.  When the government shows up to ask him to hunt Bigfoot down before it spreads a deadly disease to the world Calvin reluctantly accepts the mission.

MHB is mostly a touching and somber film about living an unintended life.  It's focus is on emotion not exploitation. Would anyone expect such emphasis from the title?  Calvin is a man about life and love but he finds himself being defined by death having to kill an evil man and eventually an innocent one of a kind creature.  Throughout the film we are treated to flashbacks of Calvin's younger self showing us how this chum became so glum.  We see him with his girlfriend as they date and fall in love.  Calvin tries to find the right time to ask for her hand in marriage but that perfect time never happens.  Instead World War II happened.  Trying to win the war cost him the life he was truly meant to live.  How do you continue with the empty life you were never meant to live?  How do you go on without the person you were meant to be with?  How can you?  You just do, I suppose. I don't know. I'm still trying to figure that one out myself.

After hearing the title and that Sam Elliot was the lead I figured this was going to be an exploitation tongue-THROUGH-cheek, over the top, action comedy similar to what the disappointing MACHETE films ended being.  Was Sam Elliot going to punch an armored tank or something stupid?  I figured it would be more along the lines of a crazy SyFy channel original movie that would ripoff the movie GRINDHOUSE with the film purposely made to look old and scratched up with cringy and tired REEL MISSING gags popping up throughout the film. Instead we are given a low key but epic film full of thought and imagination.  There are more moments of quiet reflection and human emotions that build upon Calvin and his personal struggles to find meaning in his life. I love the pebble in the shoe that slightly plagues Calvin throughout the film.  He tries to get it out but it seems to be lost in his shoe forever.  At the end he is able to accept his past and move on.  Then like magic the troublesome pebble falls out no longer an irritant.  That is where the real imagination is. It is in the smaller moments that have bigger meanings and make this a special kind of film.

Nazis, wildfires, government officials in bio-suits entering menacing giant bio-domes, cursed shaving, and a diseased zombie looking Bigfoot populate the film but they do not overshadow the core meaning of the film. That is thanks to a single vision brought to the screen by writer/director Robert D. Krzyowski.  He manages to give us a lot visually with a smaller budget without major distracting influences of a studio committee trying to market the film to the masses and their expectations. Life, love, loss and regret are the real focus of the story,  When the story switches over to hunting the Bigfoot those themes are not lost.  There is a strange relationship that forms between Calvin and the Bigfoot during their battle.  They are the same.  The last of their kind both try to live in an ugly unforgiving world yet only one of them can continue to live.  In a way hunting Bigfoot is his way of dealing with his past.  He doesn't want to kill an innocent creature. The ugly thing is even a vegetarian.  But fate has deemed him to have to die and that sad duty falls into the hands of our man Calvin.  It seems that killing an evil man couldn't save the world but sacrificing an innocent creature will.  Bad things happen to the good. That is the way of things.  Calvin comes to some kind of personal resolution and appreciation for the life he does have.  Though his past is still a part of him he can continue with hope of a brighter future.

If  you ever lost love due to pursuing a career then I would suggest you give MHB a try.  You might reach some kind of catharsis by the story of Calvin Barr and how he lives his life of regret.  The movie has a bit of gore but not much to remember so if you are looking for that kind of thing only then I still highly recommend it.  I think most monster movie lovers who give this drama with its eccentric name some attention will discover an engaging story that has never been done before. A rare achievement. Thank you, Mr. Krzyowski for taking risks and delivering an entertaining film that highlights what an incredible actor Sam Elliot is.  He deserves important more mature films like this. Give it a watch and see for yourself.