DOLPH LUNDGREN'S THE PUNISHER is highly underrated because I say so. 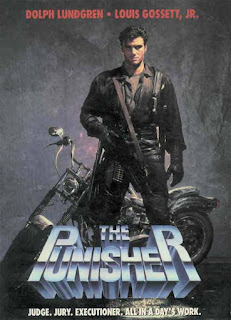 THE PUNISHER starring Dolph Lundgren is the second best Punisher film out of the three.  Much maligned by critics and the nerds this action packed comic book movie maybe far from the source material but I say take a closer look.  Is it really?  Is it really as bad as the nerdos on the Internet say it is?  I say this Punisher film is a better made and smarter movie than most action movies in general.......And by "smarter" I mean this movie does what it is suppose to do better than most action movies.

The story, simply put, is about the Punisher getting mixed up in a gang war between the mafia and the Japanese Yakuza.  The Yakuza are as cutthroat as they come killing any and all that get in their way including Peter Bear who apparently "really cares".  After five years of killing mobsters the major crime families unite to stop themselves from killing each other.  Unfortunately for them the Yakuza see their weakness and move in on the mobs territory.  Unfortunately for the Yakuza however, that territory happens to be the hunting grounds of the Punisher.  Whoops.

As an action movie DL's THE PUNISHER is either ahead of its time or the last of the truly great action films before everything went PG-13 emphasising the spectacle over violent action.  There are plenty of scenes of bad guys getting shot up, stabbed, and ran over.  They are all filmed well capturing the excitement of the violence with well choreographed shoot'em up fight scenes.  Often the action flows fast with longer than usual continuous shots similar to a John Woo style action piece.  Heck, even the car chase scene was exciting.  It can get wonderfully excessive too like the early eighties action films.  There is a part where the Punisher and crime boss Gianni Franco (Jerden Krabbe) emerge from an open elevator and begin machine gunning the crapola out of about twenty guards that were armed with nothing but swords.  I know a lot of you nerdos out there think you look cool swinging your samurai swords around and all but a sword isn't going to do much but make you look stupid when a gun is pointed right at you.  The scene reminded me a bit of the kill'em all and make it look easy ending to COMMANDO.  A high body count is always welcome in a Punisher film and Dolph's does it right.

Comic book movie wise THE PUNISHER loses it's 'Street Cred' with the source material.  I only say that because gone is the trademark white Punisher Skull glowing from his chest.  MARVEL wouldn't allow it.  Whatever.  I do feel that the look of the film itself looks very close to the early days of the Punisher comic.  Neither were too colorful with a slight grey overtone.  I don't think this was done on purpose.  It was probably an accident or I am completely wrong and I don't know what I am talking about which seems more probable.  I also like that this isn't an origin story and the Punisher isn't out for revenge even though the majority of guys he kills belong to the crime organization that was responsible for the death of his family.  So there are a couple of things that DL's THE PUNISHER gets right.  I appreciate that.  Oh, and there are ninjas too just like in the comic.  In case you didn't know it was a ninja who killed Microchip's son.  Sadly Microchip does not appear in this Punisher.  They replaced him with a drunk, out of work, homeless thespian (actor) who has a tendency to speak in rhyme.  I actually like this character even though he can be seen as an annoyance.  He serves as the Punisher's informant.  He is the 'funny' character that doesn't belong in any action film.  But he didn't really bother me too much.  I will give him a pass.  That will be my one good deed for the day.

Lady Tanaka (Kim Miyori) is the crime boss of the Yakuza.  They don't get much more eviler than her.  She is bloody brilliant.  As a tremendously strong presence in the film she comes across as unstoppable and superior to all around her.  Her appearance in the film along with her small army of ninjas raise the bar in villainy.  In fact the crime boss Gianni Franco who is a badass himself has to team up with the Punisher who has been trying to kill him the past five years just to come close to bringing her down.  When it comes to movie comic book villains she has to be one of the best and baddest.  Its too bad none of the know-nothing-nerdos out there will ever give her credit because she doesn't shoot laser beams or control metal or whatever the bad guys in comic book movies are doing these days.

I know the opening credits at the beginning of the film look a little cheap with the same shot of the Dolph turning around and shooting glass figures of criminals and ninjas.  They reuse the same shot over and over again.  It's not too creative but give the movie a break.  Let it do what a good Punisher film does.  Kill lots of the guilty violently as possible.  This is a great movie and one of Dolph Lundgren's best action movies.  He does a great job portraying the solemn tortured and sometimes naked Frank Castle.  Unfortunately he does have some stupid lines trying to be a wiseguy in the face of certain doom.  There is a part where the Punisher is being tortured on a table that stretches him out by his arms and legs.  Lady Tanaka asks a question for which the Punisher responds "Is the answer True/False or Multiple choice?"  Terrible.  Just terrible.  Save the comedy for the professionals, Dolph.  Yea, I know he didn't write it but he is tough enough to punch the writer in the face and make him change the dialague is all I am saying.  I love this movie.  I don't think it gets the credit it deserves.  Watch it and see for yourselves.