CABIN IN THE WOODS is the JURASSIC PARK of horror movies! 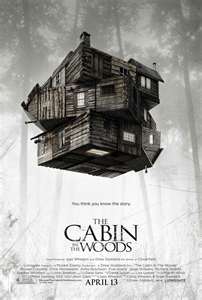 Finally we get a horror movie with some imagination.  CABIN IN THE WOODS is one of those movies that you want to know as little as possible about.  Don't watch the trailers.  Don't read the synopsis.  Stay away from reviews.  Just go and see it.  Stop reading this right now and go see it.  I am going to spoil everything so just go away.  This movie kicked my butt.  If you love horror movies then you should love this one.  There is lots to see.  In fact I think CABIN IN THE WOODS is the ultimate horror movie.  Let me just say that it is not about five friends going to a cabin in the woods.

CABIN IN THE WOODS is about five friends who go to a cabin in the woods.  Before that however we are introduced to two company men (One played by the bad guy from BILLY MADISON.  Hurray!) working at some unknown company talking about their lives and such.  They are a couple of likable funny individuals who apparently are monitoring our five friends as they go to the cabin in the woods.  We discover that these two are manipulating the youngsters into summoning something bad to kill them from an elaborate facility underneath the cabin.  The question is why.

This movie has everything.  It is way bigger than what you think.  The facility holds thousands of different kinds of horrors in holding cells waiting for the college kids to choose (accidentally of course) which monster will arise and kill them.  The kids think they are on a weekend getaway but really they are being led to the basement where several strange objects are kept.  Kids are suppose to explore the cellar eventually activating one of the objects to summon whatever monster the object is tied too.  The employees actually take bets on what monster will be summoned.  Funny stuff.  At the end the two college survivors sneak down into the facility where they release all the horrors onto the staff and armed guards.  What we are treated to is a whole SyFy Channel Original Movie Monster Reunion of epic gruesome proportions.  We have a giant snake, a giant spider, a giant bat, a kick ass looking werewolf, a Pinhead knock off,  a scary clown (Who I named Stabby McStab Stab), psycho killers from THE STRANGERS,  a killer teeth face ballerina and a Merman which apparently is the Aqua Man of the horror community.

If you are a kid or just looking for inspiration for a horror idea this movie is perfect for you.  It is extremely smart and clever with interesting characters including all five college friends.  Horror cliches are present but implemented in a very clever funny way.  The movie gets crazier and crazier leading up to one full blown holy heckola of an ending.  It really is more of a funny movie than it is scary.  In fact the movie reminds me of season 4 of BUFFY THE VAMPIRE SLAYER where the government has a research facility underneath Sunnydale where scientist experiment with monsters and demons and such.  I guess that makes sense since Joss Wheadon helped produce this sucker.

CABIN IN THE WOODS brings originality back to the horror genre. It is a big movie that starts off small  The goods are delivered and then some.  Boringness is nowhere to be found and for the most part the story is unpredictable.  Mostly.  It will be extremely hard to beat this movie for "BEST PICTURE OF THE YEAR" at the awards show in my mind.  Good luck, all the other movies coming out this year.  You are going to need it.