THE ANIMALS is worth a look! 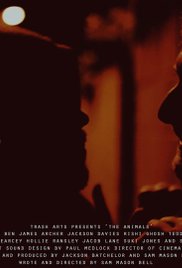 THE ANIMALS tells a cautionary tale of four friends who succumb to the temptation of easy money through breaking and entering burglary to solve their financial troubles.  This is a straight forward character driven drama about the disastrous results of believing the ends justifies the means.  Director Sam Mason Bell has given us a simple but compelling tale that comes together rather nicely through expert cinematography and down to earth actors who bring a true sense of realism to this indie film.  What is really great is that you can watch the whole thing for free at Streamnowtv.com.  Who doesn't like free?  The characters in this movie certainly do.  But unlike watching the free shows on Streamnowtv.com, their idea of free comes with a price.  Guilt.  Watch it here instead of reading my review.  I think you are going to like this one.  Here is the link.  Go on now because the rest of my review is going to be rather spoilerific.

Unable to get a job to provide a better life for his girlfriend, George (Ross Doney) decides create a small trusted crew to rob houses for easy cash.  This crew consists of Simon (Rishi Ghosh), Perry (Ben James Archer), and Bill (Jackson Davies).  All are friends from childhood.  During their more rebellious years they had taken up burglary to a small extent with little consequence.  Now that they are adults they figure they can dip their toes into the grimy waters of crime and leave whenever they want.  They learn the hard way that they can't.  Though their crime sprees are successful with no interference from the law none of the four seem to be happy with their success.  George still can't find himself a job and always has to resume his career in burglary.  With each break-in the chances of something bad happening increases.  They never seem to realize that until it is too late.

THE ANIMALS is an intimate look into this circle of friends.  Each man has their own reason for joining the crew.  George needs money.  Perry sees a life of crime as a real career choice. Bill thinks its fun.  Simon who may be the most tragic character of all is up front with his reluctance but chooses to go along with his mates out of loyalty.  In the end they have to face the consequences on their own as individuals.

When caught red handed by the person whose house our misguided heroes were burglarizing a death occurs.  It turns out that Bill is a  Wild Card and goes into a fit of rage and murders the home owner.  From then on the consequences of their actions weighs heavily on their conscious.  This is where the film really gets uncomfortable in a good way.  These men have to return to their loved ones and try to pretend that everything is normal.  You can see the guilt wrap around each character like an invisible snake choking them to death and bringing about the destruction of their personal lives and relationships.

I cannot stress how spot on the acting has to be to make a film like this work.  There are no car chases, explosions or action scenes to distract the audience.  If the actors are unbelievable then the whole film falls apart no matter how good the cinematography looks.  Every actor and actress needs to be commended for their excellent performances.  The main characters are doing bad things but you sympathize with them.  That is hard to do.  I personally can relate to George wanting to provide a better life for his girlfriend but finding closed doors everywhere he turns.  The hot headed Perry makes you hate him at first but as the world of crime becomes more and more unpredictable you can't help but feel sorry for the guy.  When you learn that Bill is unstable unaware of his violent rages and see how these fits destroy his life you will feel sad.  Simon, who is the level headed one in this group loses the love of his life when he is compelled out of guilt to confess to his boyfriend that he participated in robberies that lead to murder.  His boyfriend wants him to turn himself to the police but Simon cannot do that.  The guilt reveals their inner character.  Have they become animals themselves?

I have only watched the film once but I keep going back in my mind replaying the events of this film appreciating the films intimacy and character arcs more and more.  This is an excellent little movie that needs to be seen.  The writing, acting and direction gives the audience many levels of the art of film to appreciate.  I think for the modern you audience looking into film and wanting to make a crime story THE ANIMALS can be and revelation.  You don't need to be 'Tarantinoesque' or bomb the screen with explosions and car chases to make a great crime film.  THE ANIMALS is proof of that.  See it for yourself and decide.  Remember it is free thanks to Streamnowtv.com.

Jason
Posted by Jason at 4:50 AM No comments: