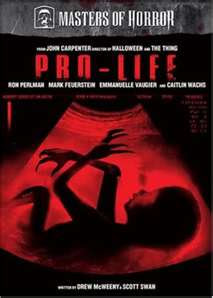 How?  That is all I am asking.  How is it that you can make CIGARETTE BURNS which is one of the greatest horror movies ever made and then go on and make this unwanted abortion?  Yeah, I know I went for the most obvious insult when describing a film that has abortion stuff in it.  So what?  I'm not a real writer, folks.  Who said I was clever?  I can barely put my pants on in the morning.

PRO-LIFE is Carpenter's second mini feature in the somewhat just okay horror anthology series MASTERS OF HORROR.  Judging by the episode I saw I would have to say the answer to my question is laziness.  I know these guys have short deadlines and it probably takes a long time to make practical monster effects but still it makes you wonder when you compare the quality of the two JC episodes.  CIGARETTE BURNS looks like it was directed by the master himself John Carpenter.  PRO-LIFE looks as if the immature, ruins everything hack Uwe Boll machine gunned his way on set with many casualties and forced everyone to make a horrible episode and put JC's name on it.  There is a stark contrast is all I am saying.

The movie starts off with a young girl seeking refuge in an abortion clinic (In the middle of nowhere? Really?) from her overly religious father.  She wants an abortion because she knows she has a lobster growing inside her.  She says that God wants her to have the abortion and the doctors are all like "okay, freak" but they don't say that out loud because that would be rude.  Ron Pearlman is the dad and he is one of only two good things about this movie.  He believes the voice of God is talking to him.  This propels him to go all out to "protect the baby".  With his three sons they storm the abortion clinic trying to save his daughter from getting the abortion.  The story is a neat concept but the execution is lazy.  It is like Carpenter got too use to sitting in chairs on the sets of the remakes of his work just to "extend his hand to accept check".  Where is the passion?

The look of the film is flat.  Yes, it is a t.v. show but these are not the usual kind of episodes you see on your magical moving picture box.  These are mini movies by the horror greats.  Their style and unique approach to horror is suppose to be showcased in every episode.  Watching CIGARETTE BURNS I could tell that Carpenter directed it.  It has that "Carpenter-esque" feel to it.  Its hard to explain.  Most of you know what I am saying.  Either you love film or you like the TRANSFORMERS movies, is all I am saying.  There really isn't much to look at in PRO-LIFE.  The sets are hallways, waiting rooms, a parking lot, offices and surgical rooms.  Its not that inspiring.  How would you like to watch a horror movie about waiting in an abortion clinic?

The acting overall is weak sauce.  Yes, the two leads are good, Pearlman is excellent, but I get that "Here comes the local community actors" vibe from everyone else.  I don't think Carpenter spent too much time with the secondary characters especially the angry dad character.  He is an angry dad so he is angry all the time.  He is just a stereotype.  He is not a real person.  He, his daughter and wife along with the clinic patrons and Pearlman's sons drown out all the good actors.  Most of them have no purpose.  Almost all of their deaths are off screen.  In fact I am not sure if some of them even died.  Did the mother and daughter die outside trying to escape?  Did the two women in the surgery room die after the demon arose from the floor?  There is also this weird screen misdirection at one point where the first son is shot in the neck by the head doctor.  Pearlman's son is dying.  He is not dead but instead of trying to save his son's life he just holds him and kisses him as if he were dead while blood gushes (very fakey like I might add) from his wounded neck.  GET THE KID A FREAKIN BAND-AIDE FOR CRYING OUT LOUD!  It's a weird moment.

Speaking of weird.  How embarrassingly bad is it to see Ron Pearlman with a doctor's leg over his shoulder as if he were banging the doctor missionary style over a desk?  The doctor is a dude by the way.  Why did they think that this would be a good scene?  PRO-LIFE tries to up the ante with the gore and unpleasantness by having the doctor's crotch cut open and a vacuum shoved up his taint to suck out his insides as if he were being aborted.  This scene along with the gorier moments like the burning afterbirth and head blastings all feel forced on the audience.  None of it feels like it is produced naturally from the development of the story.  Here is a bunch of gore and gross stuff because this is a horror movie and horror movies have gore and gross stuff in them.

The ending is over way too quick.  The scene where Pearlman comes face to face with the demon should have been a memorable and deeply traumatic scene.  After murdering all those people it is revealed that the voice he was following was not from God but from a demon.  Pearlman looks sad for a moment and then the demon approaches and then the scene cuts away leaving the audience to assume that Pearlman was killed.  We don't even get to see Pearlman die!  This is the most important scene in the film and it is barely leaves an impression.  More time should have been spent building up to this moment.  Pearlman's reaction should have been more towards extreme despair like Luke Skywalker in EMPIRE STRIKES BACK when he learns that Vader is his father.  I will say that the second thing I like about PRO-LIFE is the demon itself.  What a great creature design.  Its big and it looks real.  The baby looked like crap.  It's crab legs with a doll's head on it.  Big whoop.  All it did was make me not want to eat at Long John Silvers anymore.

PRO-LIFE tries to teach us that those who kill in the name of God are doing the devil's work.  It's a great message but none will hear it because they are distracted by the lazy special effects, the lazy dialogue, the lazy cinematography and the lazy direction that permeates the entire run time of this movie.  Where is the haunting or at least entertaining John Carpenter musical score?  PRO-LIFE doesn't feel like a Carpenter film and that is why I don't like it.  All the elements are gone even when they are there.  I guess the concept for PRO-LIFE  was ASSAULT ON PRECINCT 13 meets THE THING but it barely comes across like that.  Everyone seems to hate on  GHOSTS OF MARS but to me that is one of his good ones.  The reason being is that you can clearly tell that it was directed by John Carpenter himself.  It has the Carpenter score.  It has the Carpenter cinematography.  It has memorable characters played by great and greatly underrated actors.  Despite it's flaws it is still good because of his style.  PRO-LIFE is BODY BAGS terrible.  That's right.  I just compared it to BODY BAGS.  Now what the flip was the deal with that movie!?!  I guess they all can't be good.  Maybe like all of his films I just need some time to appreciate PRO-LIFE.  Maybe in twenty years I will join the ranks of all those critics that crapped all over Carpenter's early work back in the olden days only to later hail it all as classic.  Of course probably in twenty years I will be dead.  That's a weird thing to think about.