X-MEN: DAYS OF FUTURE PAST rights the wrongs in more ways than one. 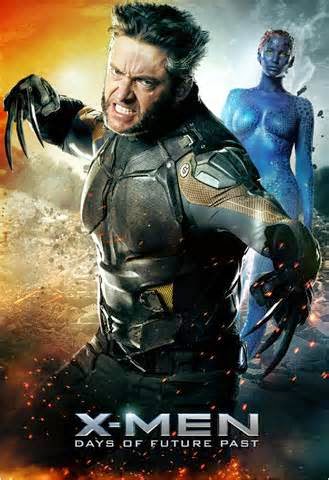 This review is going to contain big time spoilers, folks.  In fact this review is not about the film itself but the spoilers themselves and how important they are.  If you haven't seen the new X-Men movie (Quick review:  It's AMAZING) then go see it and then read my review.......If you get bored enough of course.

X-MEN: DAYS OF FUTURE PAST is a rare kind of film.  When I say rare I do believe a movie like this has never ever been done before in the whole history of movies.  Maybe I am wrong but I am not going to bother to do the research to find out.  What DAYS does is go back and correct some of the really bad story decisions that were made in the weaker entrees of the franchise.  That's right, folks.  If there was something you didn't like in X-MEN : THE LAST STAND or in X-MEN ORIGINS: WOLVERINE this movie tries to correct it.  How unique and never done before is that?  DAYS sets a new possibility in future fantasy movies.  If you mess something up just make a sequel dealing with time travel to fix it.  Hopefully the STAR WARS movie makers are paying attention.  (*cough*THE PREQUELS NEVER HAPPENED*cough*)

As movie franchises produce more and more sequels, Hollywood has a tendency to make each new sequel worse than the one before it.  It gets so bad that studios try to hide the fact that they made a part 5 of something by removing the number and giving the movie a really long terrible title.  Instead of saying DIE HARD part 5 we say ITS A GOOD DAY TO DIE HARD.  Really?  DAYS doesn't have the number either but the makers try and make the best dang X-Men film possible.  It is really hard for me to say which is better, DAYS or X2.  Both have great stories that engage your emotions and thoughts but DAYS has a special purpose.  It was made not to just tell a great story but to correct past mistakes that ruined the franchise.  Three of those mistakes were killing off Jean Grey, Scott Summers and Rogue choosing to lose her powers which made her special.  These decisions had limited what we can expect to see in future X-MEN movies.  They were never going to be the same ever again in a bad way.  The relationships would never grow and develop.  Rogue would never grow super strength and gain the ability to fly making her a more important member of the team.  Worst of all Wolverine and Scott would never be able to bounce off one another which was a big reason why the first two films were so good.

DAYS is all about traveling back in time and changing the past to correct the present.  Mystique kills some guy in the past and that causes the Sentinel program to commence which in time leads to the destruction of all mutant-kind.  Wolverine of course is the only one who can go back so far in time so once again he takes the lead role but it is a new kind of role.  Remember in LORD OF THE RINGS: RETURN OF THE KING when Sauron sends his mouth piece to go out from the gates to talk because Sauron has no mouth of his own because he is dead?  Basically that is what Wolverine has become.  He is Xavier's mouth piece to convince his younger self to stop Mystique.  Since only his mind can go back in time and occupy his younger body, Wolverine has no metal skeleton.  Meaning at the end he really has no power to make a difference and is easily dispatched!  What an amazing decision on the writers of this film.  It looks like just another Wolverine movie but in the end Wolverine does nothing but get killed kind-of-sort-of.  DAYS takes a really big risk and it pays off.  Wolverine has one small moment when he uses his claws on some goons but he never goes beserker rage which the nerdos look forward to most in these films.  This time saving the world comes down to the decision made by Mystique.

By the end we see Jean Grey is still alive as well as Scott Summers.  Rogue never lost her powers and Wolverine is now a teacher at the school as if he never left to go find himself.  There are questions though left unanswered which mostly deal with Wolverine himself.  Does he still have his metal skeleton and if so did he go through the whole process of losing his memories again and is he still missing the metal on one of his claws?  DAYS doesn't say or maybe it does without being obvious and I didn't catch on.  Still it is nice to see the really bad mistakes are corrected and we can hopefully see the old band back together again in X-MEN: APOCALYPSE aka X-MEN part 7.