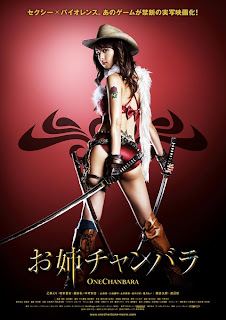 I don't know what ONECHANBARA means and I certainly don't know how to pronounce it but if you asked me I would have to say it means "over sexed Bratz doll who wears inappropriate clothing for fighting creatures that stopped living and became mixed up zombies happy luck wish well."  That's a rough translation from Japanese into English.  Or maybe not.

ONECHANBARA is the story of a kung-fu zombie killing machine chick whose name is......I don't know I am just going to call her Onechanbara.  She is on a quest for revenge in a world destroyed by zombies.  Onechanbara is set on killing her sister who murdered her father back in the good old days before the zombies ate my neighbors.  The evil sister is working with an slimy scientist who is responsible for turning the world's population into fleshing eating zombies.  Onechanbara is a quiet kind of wannabe Clint Eastwood man with no name  type character.  Its a little hard to take her seriously when she is walking around in a bikini, cowboy hat and feathered boa.  Lets just say that she isn't the most convincing argument for women fighting in the military.

ONECHANBARA is a video game movie and its not too bad overall.  There is plenty of action and there are a couple of hot chicks running around to keep things interesting.  You do see boobs at one point but they aren't the boobs you want to see so that is somewhat of a major let down.  But the movie follows the #1 rule of a good zombie movie.  They kill lots of zombies.  Apparently Onechanbara and her evil sister have special powers. I call them "video game powers" because they don't really make sense unless you live in the world of a video game.  This allows our heroine to slice and dice zombies into bad special effects and to do the splits on their faces.  The two sisters have this huge fight at the end where everything turns into DRAGONBALL Z.  Their moves are so fast that they appear in brief flashes on the screen impossible to follow with your eyes.  Its badass.  There is no shaky cam close up crap to try and intensify the action.  While the concept of a woman in a bikini fighting zombies is the stuff of exploitation the movie does its best to make you care for these characters.  All the characters suffer from major loss in their lives and movie focuses on their pain to drive the story.  I like that.  It gives the movie some heart.

Since this is a video game movie I have decided to call the special effects "graphics" instead.  The graphics in this movie aren't very good.  This super zombie is shot at the beginning of the movie and the bullets break against it's clothing in digitized pixels.  The bullets don't even break the clothing.  It looks terrible.  When the zombies get chopped up they turn into cartoons but that doesn't really bother me though.  Its a video game movie after all.  The biggest improvement the movie could have made was the cinematography.  The beginning takes place at night and the first thing you notice is how ugly everything is.  Its too dark and colorless.  The sets are empty warehouses and the outsides of empty warehouses.  Its not too imaginative.  The end fight looks a lot better in a open field in broad daylight.  Maybe they got a new director for the ending.

They were scraping the bottom of the barrel when they picked the main villain.  The bad guy scientist looks more like a child molesting uncle than the guy who destroyed the world with zombies.  I am not sure why this guy ended civilization as we know it.  Maybe he got teased a lot as a kid.  Maybe he showed up to some kind of scientist convention not wearing pants.  He was like "Hello everyone.  I have invented a transportation device that can transport any item from my machine to anywhere in the world and from anywhere in the world to my machine.  It will revolutionize traveling as we know it.  No longer will we depend on fossil fuels to move around in our four wheeled coffins."  And then some jerk in the audience was like "Hey doc, why don't you transport your pants back on!" and everyone laughed at him.  That is probably what happened but they don't mention it in the movie.  He's not a very menacing bad guy is all I am saying.  He is more slime than man.

ONECHANBARA should have been a better movie.  They should have invested more in the look of the film and some of the special effects.  But despite its flaws its still a good bit of fun.  If you like zombies, badass ladies, violence galore then you should like this movie.  Its kind of like D.O.A. Volleyball meets Left 4 Dead.  Weird.  Also weird is the title.  I don't remember seeing a bikini samurai squad anywhere.  There is only one gal in a bikini.  What a rip-off!  Can't wait for the sequel though.