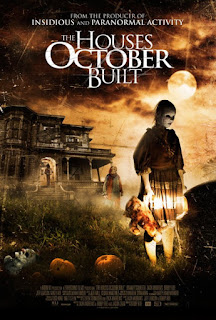 Two of the scariest horror films ever made are in the 'found footage' genre.  THE BLAIR WITCH PROJECT and PARANORMAL ACTIVITY are the go to examples of how it is done right.  I do like the sub genre.  The problem is that there are too many of them flooding the market making the gimmick an immediate turn off to any movie that uses it now whether it is good or bad.  Once you see that you are watching a BLAIR WITCH knock off it is hard to maintain interest. Us horror enthusiasts are all too familiar with this style.  Been there, done that. Sometimes the film makers try to add digital special effects to their found footage movie in an effort to actually show us something.  C.G.I. is too noticeable and betrays the reality the found footage genre tries to reenact.  The audience response is immediate disbelief followed by boredom.  The worst thing about found footage is that it can hurt what otherwise should be a good solid horror movie.  That is where THE HOUSES OCTOBER BUILT comes in.

THE HOUSES OCTOBER BUILT touches on a real life fear concerning haunted house attractions and the possibility of genuine horror actually happening in those houses.  Are the fake dead bodies displayed gruesomely for our thrills really fake?  How stable mentally are the employees at these yearly events?  Do they have criminal records?  Five friends go on a road trip to film haunted house attractions throughout Texas to explore these questions.  They search for the scariest house possible going off the main roads and into the back woods attractions.  They tempt fate searching for something a little more dangerous following word of mouth for an attraction that moves about never staying in one place.  The five thrill seekers do interviews with employees at the various haunted houses they go to.  As the documentary crew explore they learn that there is a potential danger and seedy shenanigans that could be going on without public knowledge.  This is the real underlining strength of the film.  This is the real horror that the film builds upon.  The concept of not knowing if the guy behind the mask in the dark put there to scare you is a normal guy having fun or a psychopath ready to snap and unalive you at any moment is truly frightening.  After watching this film you may think twice about going to a haunted house for the rest of your life.

Sabotage!   Someone sabotaged this film.  That is the only way I can explain it.   Whoever was the super genius who decided to shoot HOB found footage style sabotaged this film.  There are some terrific Halloween costumes the killer's wear that are amazing.   Some are so good that they hint that the killer's may possibly be of the supernatural variety.  The Doll Headed girl is horrific.  Truly she is the stuff nightmares are made of.  She is amazing to look at but not for too long.  The make-up effects artist that brought her to life deserves an Academy  Award.  The other killer's dressed as various psycho killer's and clowns are equally menacing and do manage to stand out from one another.  That is hard to do since once you have seen one bloody killer clown you have seen them all.  The found footage style mires and blurs the monsters of the film hiding what could have been iconic characters to make this film stand out from the flood of other horror.  The set pieces from the haunted houses are probably wonderfully horrific in person but shot found footage style they too dark to see the details.  The camera shaking about doesn't help either.  I really wish the cinematography of the film looked like the awesome movie poster.  The poster is oddly beautiful in a dreadful kind of way.

THE HOUSES OCTOBER BUILT is worth a watch.  There is truly a scary premise that hasn't been fully explored yet concerning the unsavory character of Halloween attractions.  Having to explain over and over again why things are being recorded is rather annoying but if you can get past all the found footage stuff you will find a good horror mystery.  If you haven't watched a ton of horror movies this one may rank higher on your list.  As for me I found the movie to be an entertaining but flawed exercise in the genre.  If it wasn't for the found footage aspect and rather obvious ending this could have been a modern horror classic.  The talent is there in the story, make-up effects and set pieces.  The makers just decided to hide it all with dark shadows and shaky cam.  Strange.