DEATH GRIP: A must watch for kung-fu movie lovers! 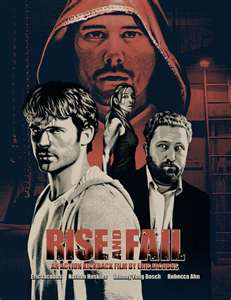 DEATH GRIP is a great example of what talented people can do with so very little.  This is a kung-fu movie that mixes high velocity action scenes with imaginative sometimes funny character moments.  This is a character driven story.  It may not seem like much at first but give it about ten minutes.  Things just get better and better.  I think I discovered this movie on Twitch Film.  There was a clip of two guys duking it out in high speed fashion.  I was hooked.  I couldn't believe this was a low budget film.  It certainly didn't seem like it watching this fight unfold.  These guys were fast and it really looked like they were hurting each other.  I was getting worn out watching our hero go blow for blow with some guy with knives.  That's not a big deal I guess.  I get winded just sitting down and turning on the television.

The story is about Kenny (Eric Jacobus) and his brother Mark (played by Zach Galifianakis.  Nah, I'm just messin with ya.  He is actually played by a very talented Nathan Hoskins.) who get mixed up with some cult who want a silver coin that was paid to Judas for the betrayal of Christ.  Cults are always fun to punch in the face.  Mark is autistic but he is a genius with combinations and unlocking locks.  It is that gift that gets him and his brother Kenny involved with a museum heist.  The bad guys end up capturing Mark and a museum worker named Rindy played by Rebecca Ahn.  What kind of name is Rindy?  Maybe IMDB messed up the name.  Rindy?  Now Kenny has to go save them and punch the bad guys in the face very very hard.

DEATH GRIP is similar in it's story structure to more of a classic Hong Kong style martial arts film.  There is a blend of bloody serious violence, strong character drama and light hearted comedy as well as some dark comedy.  There is a mix of emotions throughout the film and that is DEATH GRIP's biggest strength.  It isn't easy doing something like that.  There is a balance that sometimes doesn't work shaking up the tone of a film to unwatchable proportions.  Eric Jacobus gets this.  He isn't making your typical martial arts film.  The elements at play go hand in hand delivering a unique and wonderful movie watching experience.  There is a lot to appreciate here.  By the end of the film you have grown to love our two heroes and ultimately its not fast fists or high kicks that save the day.  Its a brother's love.  I'm getting all teary eyed just writing that last sentence.  Another unique thing about DEATH GRIP is how the director plays with audience expectations.  Throughout the film we see Kenny kicking serious butt only to back track and show that the badassery that took place before our eyes was only happening in the character's head.  Now normally I would say not to do that but it is incorporated in such a clever way that you can help but laugh and have a good time when it happens.  At times Kenny will get punched in the face or beaten to a pulp because he was caught at the moment day dreaming when he should have been "opening a can of whoop ass."  What is going on in the movie doesn't stop just because our hero drifts off into his imagination.

The fights are phenomenal.  Eric Jacobus not only stars but also directs DEATH GRIP.  He and his Stunt People crew understand how to perfectly shoot and execute a fighting scene.  These guys have it down to a science.  There are no wires or fast edits mixed with excessive shaky cam.  We see everything in sometimes long continuous takes.  The fights are fast and they leave a lasting impact.  You can tell what is happening.  I wish I knew kung-fu.  All I know when confronted with a fight is how to hide under some coats and hope that somehow everything will work itself out okay.  One fight reminded me of the hallway fight in OLDBOY.  Kenny is fighting a bunch of guys and the fight is a little sloppy like in real life and he is beating up these cult members and they are beating him up at the same time ending with them all jumping on top of him.  If you don't like anything about this film at least you can say that the fights are awesome.  They are way better than the fights you would see in a Bourne film or any other big budgeted mainstream film.

Movies like DEATH GRIP need to be supported.  The acting is solid with some nice performances from the villains as well as our heroes.  I would like to see Eric Jacobus in more action films.  He has a strong screen presence and he knows how to kick butt.  I hope in the future he does more films but next time the truly badass moments do not take place in the character's imagination.  He could be the next Tony Jaa if he plays his cards right.  Maybe we will see him next in THE EXPENDABLES 3.  If you want to impress your friends when throwing down knowledge of great kung-fu flicks mention DEATH GRIP.  You will be the coolest in your world of cinematic Nerdom.  Watch it with the commentary on for some good insights and funny moments between stars Eric Jacobus and Rebecca Ahn.