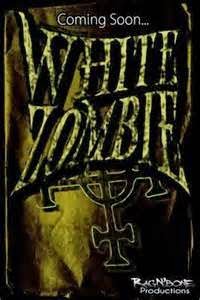 RagNBones has taken on the ambitious task of re-imagining the Bela Lugoisi film WHITE ZOMBIE.  The original WHITE ZOMBIE is one of those films I have seen a hundred times yet I remember almost nothing about it but the fact that Bela Lugoisi is in it.  It is one of those films I have playing on the t.v. in the background every Halloween morning but I never just sit down and watch it.  I don't know why I do that.  RagnBone Productions was nice enough to send me a screener of their version of WHITE ZOMBIE.  Thank you so very much!

Madeline White and her fiance, Neil Bellamy plan to marry each other on a plantation on ZOMBIE ISLAND!  Actually it is not called 'ZOMBIE ISLAND' but that is what I call it because there are zombies everywhere.  The plantation owner, Gillies Beaumonde has convinced Madeline to come to his plantation for the wedding to try and convince her to fall in love with him.  Beaumonde will do anything to win her over including associating himself with Severin the local evil voodoo practitioner who everyone strongly dislikes because he is weird.....and I guess because he is evil.  With Severin's aid, Beaumonde poisons Madeline on her wedding day causing her to seemingly die.  With the powers of voodoo she is brought back from the dead becoming the prize of three men competing to have her for themselves.  While Beaumonde was planning on screwing Neil out of a bride, Severin was planning on screwing Beaumonde out of a bride and all his wealth.

Scarlett Shepard is absolutely iconic as Madeline White.  She is beautiful with a gleam of grace that summons images of classic Hollywood starlets from the golden age of cinema.  Her costuming is perfect.  The bridal dress she wears is elaborate and short making it almost resemble a ballerina's silver and white tutu worn for the grand production of SWAN LAKE.  That is rather appropriate since two of the antagonists in this movie have her dance around (Figuratively speaking, of course.) for their amusement.

The movie moves about from the three main characters, Neil, Beaumonde and Severin as they each do what they have to to get what they want.  Even though Severin is the main baddy with the coolest look and spookiest presence I like Beaumonde's character the most.  He has the biggest character transition in the film.  I single him out as the main character in the film.  A great deal of the film is focused on his plight to win the girl no matter the cost.  He learns the hard way that women are not objects and voodoo is not to be messed with unless of course its that hilarious WEEKEND AT BERNIES II kind of voodoo.

RagnBone's WHITE ZOMBIE presents a world bathed in night with zombies casually moving about aimlessly in the island cemeteries.  Voodoo is a way of life here and zombies are a common sight.  This world is brought to life through higher production levels and aided by some creative camera work.  The costumes look authentic especially when they are worn by great actors who come to life in them.  I particularly like Tom Smith as Dr. Bruner.  He looks  a lot different from that crazy cannibalistic yahoo dad he played in THE WRONG SIDE OF THE TRACKS.  What a transformation!  That is the complement of a great actor.  In WHITE ZOMBIE he looks like he is from that time period.

Even though this is a low budget film it doesn't feel like it.  Like all low budget films there are things to forgive but if you like independent film and want to see what great things other film makers are doing out there who care about the craft and want to tell a good story then I suggest you watch RagnBone's WHITE ZOMBIE.