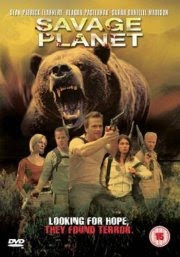 Basically in the future a bunch of nobodies led by the Young Indiana Jones travel via "SCIENCE!" to a distant alien planet that is similar to Earth. Their mission is to find a thingy that will save their own pollution filled world. What it is exactly I don't know. I wasn't paying attention. I was drinking when the scientist people were explaining that part, okay? I admit it. I have a drinking problem. Don't judge me!!!! Now remember this is a far away planet that should have all kinds of strange new exotic creatures. You must keep that in mind for the joke of what this movie is to make any sense.
Our band of science guys arrive on the familiar looking un-named planet only to discover that the dominant species is stock footage of bears. That's right stock footage of bears. How 1940's. We don't even get the quiet dignity of a guy in a bear suit. Rip-off!!! And you guys know how much I like a man in a bear suit. Now the movie does try to explain that these bears are not your average picnic basket stealing bears. No, these are super evolved bears that don't die when you shoot them with bullets. Hence that is why the stock footage doesn't react to Sean Patrick Flanery when he shoots them. Funny enough the "special" effects department added in little blood splatters on the stock footage. Hilarious. Savage Planet tries to make the bears seem super menacing by giving them PREDATOR vision (kind of)and telling us that they are super big. Unfortunately the stock footage shows nothing more than your average eccentric documentarian eating bear.

What you see in this movie is alot of hiking and back packs with hiking stuff and if you stop hiking and say you need a rest your science buddies will leave you and you get attacked by a bear and you die by a random floating bear claw in a silly student film special effectsy kind of way. The three rules for survival are very simple. Don't stop and say you need to rest aka don't be fat, don't run ahead because your head will be knocked off (not ripped off this movie is too low budgeted to look real) aka don't be the bad guy, and three, be Sean Patrick Flanery.

The fact that these people are on a alien planet getting attacked by bears isn't the only thing that makes this movie funny. The not-so-special effects add a surreal "Am I really seeing what I'm seeing shouldn't we be beyond this" kind of feel. Sean Patrick Flanery is suppose to be some kind of BADASS. This is indicated by a large scar that crosses the entirety of his chest. That means he's a tough dude. The scar however looks like a large amount of rolled up silly putty pressed upon his chest that hopefully wouldn't fall off during shooting. One guy gets his side torn off by a bear and you can see inside that his organs are made of cartoons that pulsate and move about like the inner workings of a clock. I can't do the head getting knocked off scene any justice. It needs to be seen to be believe.

This is a SCYFY original movie and they really out done themselves in the stupidity department. Everything they put out is so random. PYTHON VS. BOA, MONSTER ARK, ROCK MONSTER, FIRE DRAGON MONSTER THING, MOULON ROUGE the list goes on and on. I can only hope that one day they will put my two favorite SCYFY original monsters together in one movie. I think it will be called SASQUATCH VS CHUPACABRA. That's a prediction folks. Until then.

Love to all especially you,