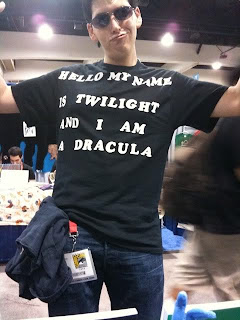 Spoiler alert!!!! I didn't hate it. I found myself actually enjoying this one.......To poop on! Nah, I'm just messing with ya. It wasn't too bad. I won't bore you with the details of the story since you have already read the books and watched the movies like a hundred times and probably written volumes of books and screenplays of your own Twilight fan fiction, you sick sick person you. Instead I will write in a hilarious fashion my own thoughts of the film and why its better than the first one. OR IS IT!!!!....Yes it is.

The first Twilight was just plain boring. I hope you like grey and rain and people walking and sitting and looking sick and playing baseball and going to school. Why would hundred year old vamps still go to high school? I think sometime in the 1980's they saw 21 Jump Street and decided to spend their undead lives un-living (HA-ha?) out their youthful looking undercover cop fantasies. I wonder who Edward thinks he is? Bella and Edward hold little chemistry between the both of them. Their love seems empty and paint by the numbers. This is how the book goes so this is how the movie goes. Bella loves Edward because he is rock hard handsome and can run really fast and climb trees. Vampires are shown as fun loving, baseball playing, My Chemical Romance wannabes. Vampires don't melt in sunlight, they can't be killed by crosses or stakes through the heart, they can be psychic or mind readers or other cool stuff. Wow! Being dead looks great! Wish I was dead! There is no real downside to being a vampire. Why not make everyone a vampire? The villain vamps are non-threatening and show up at the end of the movie. Movie's over morons I guess we will have to wait till part 2 to see something happen.

It does. Part 2 shows the dark side of vampires. Somewhere in Europe there is a council of really old, super powerful vampires that have no problem killing hundreds of tourists to satisfy their thirst. These guys are not to be messed with. They bring a sense of looming danger to the film and I hope to see more of them in the future. Its better than seeing Bella screaming in her pillow at night. Awkward. How many times do we really need to see that? Werewolves make an appearance finally and they too are not to be messed with. One of them got really pissed at his girlfriend so he took her face and smashed it into blender..NAH, I'm just messing with ya. No, he wolfed out too close to her and accidentally cut off half her face. I wonder how he explained that one to the authorities? The wolves fighting the vamps keep things interesting because there is something actually happening on the screen. The movie isn't one long commercial for depression medication even though it tries with it's sad Bella scenes.

I don't know where the council of the vampires is. I don't remember. I will say its probably in Transylvania somewhere. They live in a city where during the movie the citizens are celebrating the elimination of vampires. Apparently a long time ago vampires were a serious issue in Transylvania and some guy kicked them all out and to mark the occasion the city puts on a big festival to honor the event. But as we see in New Moon the vampire council kill a bunch of tourists in one day as if they were merely having a simple lunch. I'm sure they do that often. Wouldn't a city that is notorious for dealing with vampires get suspicious about a bunch of tourists going missing in their city everyday? Would there not be people looking for them? I am sure there would be one detective in town that would say " Hey, Johnny. Doesn't it seem strange to you that Los Angeles has three hundred missing person cases every year and we have three hundred missing person cases everyday?" It just doesn't make sense. But then again Twilight is about feelings. Not logic.

New Moon can't go five minutes without showing Edward in some strange spooky way. I get it. Girls see Twilight for the pale creaminess of Edward. I get it. But what about story. This movie is about the relationship between Bella and Jacob. Edward left. Its Jacobs turn. Yet according to the Twilight movies a vampire can turn into a ghost and visit people while they are doing something dangerous. Bella wants to ride a bike with some jerk and here comes the ghost of Edward appearing out of thin air telling her to turn around. I know what you are going to say. "Jason, you magnificent man you. That wasn't a ghost. That was Bella's conscience  manifesting itself in the form of the one who hurt her most. Thus giving her reason to rebel and be dangerous." To that I would respond. "Then why is she arguing with it when she is about to cliff dive?" How often do you argue out loud to a non-entity of yourself? Answer. You don't. Twilight focuses too much on the star power of Edward. What if they did that in other movies? What if Star Wars: A New Hope banked too much on the star power of Alec Guiness? What if George felt that the audience would lose interest after Obi-Wan is dead and decided to put him back in during a pivotal moment in Star Wars? I think it would go something like this......

"Tugging a dead R-2 unit Luke Skywalker's X-Wing nears the exhaust port ready to fire. He ignores the booms and blasts of exploding Tie-Fighters and X-Wings all around him. He needs to focus. He is the only one left. He is the last hope. Within firing range he presses a button and summons the targeting computer that extends into his immediate view. Suddenly the blue ghost of Obi-Wan appears before our hero just outside the cockpit window.

"Luke, use the force." The blue Obi-Wan speaks with assurance.

The X-Wing jerks to the right and explodes in the trenches of the Death Star.

Pretty scary stuff, huh.? Almost as scary as going to school with hundred year old teenage vampires that could go blood crazy at the slightest hint of a bloody nose. Why do they go to school again? To not be noticed? Heck one of them tried to kill Bella on her birthday because she cut her finger. Think about it, folks. Anyway I still like New Moon and do plan on seeing the next one in the theater. I am not going to say I am a fan because the love story which is the main focus of Twilight does not interest me in the slightest. Its the conflict of Edward and Jacob that I look forward too. Boy on Dog action. GO TEAM JACOB!....Nah, I'm just kidding. I am an Edward fan. He looks just like me.
Posted by Jason at 8:51 AM

Email ThisBlogThis!Share to TwitterShare to FacebookShare to Pinterest
Labels: DRACULAS