THE BIG GUNDOWN is finally here!!! 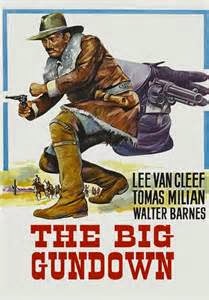 There are THE STAR TREK nerds.  There are THE STAR WARS nerds.  I am a Spaghetti Western nerd.  I have a bunch of them.  I have books written about them including an encyclopedia which I have read cover to cover to learn about as many as I can.  What I learned from my extensive research is that there are not too many good ones.  Let me tell ya something, folks.  THE BIG GUNDOWN is one of the good ones.  It is a must buy!

First off I just want to thank Grindhouse Releasing for putting out a comprehensive package for the THE BIG GUNDOWN.  You get the American version.  You get the European longer cut plus the soundtrack.  There is also a DVD of the movie in case you don't have Blu and a booklet explaining the film's past.  The transfer is near perfect.  I seem to recall some blurry shots here and there but not too many and barely noticeable.  Maybe I am just losing my eyesight.

The movie is about Lee Van Cleef a bounty hunter who is on the trail of Tomas Milan for a crime he didn't commit.  Milan's character is a peasant who we know nothing about the except that he has been accused of the rape and murder of a young girl.  We meet his character, Cochillo playing in a pond trying to convince a young girl to join him in the water.  Cleef shows up and tries to capture Cochillo but is shot in the back by the young girl thinking he is a bandit.  Whoops.  The movie plays out like a cat and mouse story where the two join forces at the end to take down those who are really responsible.

THE BIG GUNDOWN is excellent.  It is well filmed with creative angles and camera movements when needed which is a trademark of the really great Italian Westerns.  The director, Sergio Sollima recognizes Cleef's strong presence in the film shaping his sleek sharp profile into many dynamic poses.  Just check out that poster and the one on the bottom.  Very few westerns took advantage of his strong form.  See the horrible SABATA films for example.  Unlike the SABATA films, THE BIG GUNDOWN doesn't have annoying funny sidekick characters for comedic relief or acrobat circus hijinks.  The film has a sharp wit with any comedy being delivered through dialogue and not simple silly loud characters to deflate the film's quality.  This is a violent film with a good amount of shoot'em up scenes.  You won't get bored.  Cochillo himself doesn't carry a gun.  He uses a knife when he duels which is very unique for it's time.  You can see how this film tries to do different things with it's characters to stand out from the flood of Italian Westerns that were flooding the theaters at the time.

I have waited a long time for this film to come out on Blu.  Now if we can only get a version of DAY OF ANGER with the same care that Grindhouse Releasing gave to THE BIG GUNDOWN.  It would also be nice to get the same for BANDITOS and THE GREAT SILENCE.  One could hope.