Yes, I sat through FREEJACK! 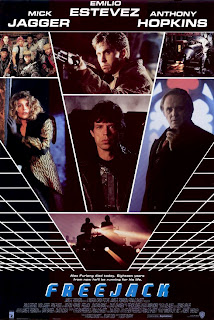 When I was a boy I went to the movies and saw something that I don't remember. I'm trying to remember but the t.v. is playing Highlander which is a movie so bad it melts my brain. What? Change the channel you say? I would but in the relationship between me and the t.v........ Well, I'm the BITCH. It controls me so I will just have to tolerate it. I don't remember what I saw but I do remember seeing the trailer for Freejack. And I do remember thinking "BORING"!!!!! That was the last I saw anything about Freejack though I did think of it often. Strange. I always wondered if it would be any good. You never know especially with me because I think Episode I is awesome. How bad could it be. It has Mick Jagger and Anthony Hopkins in it. They wouldn't be in a cheesy, rip-off of Blade Runner, right? W-wrong!!!!

A Freejack in the movie Freejack is a person pulled from the past at the point of his known death and brought into the future to be taken over by the mind of the rich guy who paid for him. Unfortunately for all of us this Freejack happens to be Emilio Esteves. They should have called this movie BLANDJACK. (Damn you Highlander!!!!) Yes, there was a time back in the day before Emilio was getting elevator shafts slammed down his face that he was considered a leading man. This movie proved otherwise. Emilio has no screen presence in this film at all. He tries to be a normal guy reacting to the shock of waking up in the future trying to figure out what just happened to him. Instead what we get is a stale, animated saltine cracker of a performance that drags and drags and drags. Mick Jagger comes along to keep the story moving by chasing him down with an army of soldiers in pink and blue armored trucks.(Gotta love the 80's) But I can't tell if he is a good actor or RockStar actor. He is suppose to deliver Freejack to the rich guy that bought him. Oh, and Renee Russo is in this movie too. I don't want to be cruel so I will just say that "Renee Russo is in this movie" and I will leave it at that. Even when she is young she looks old.

According to Freejack in the year 2009 there will only be the extremely rich and the poor, everything is polluted and the rich will drive around a variety of colorful dildos. I know you think I'm kidding but you don't know jack about Freejack. (That was Highlander talking again. Sorry.) The entire film looks generic with a bunch of generic sci-fi ideas crammed into a generic script that never fleshes out any of the relationships contained within. Emilio is a generic actor that temporarily reverts back to Billy the Kid his best role ever. I guess they couldn't afford Charlie. Freejack's design and look is a cross between an Italian rip-off of Blade Runner(If one ever existed) and Lawnmower Man. Wait until you see the extreme computer generated mind warp that goes on for ten minutes. Your suppose to think "Awesome" but all that you can think about is how close the bathroom is so you can smash your face into the toilet. Also the future has a "blue-ish" sleep inducing look to it. Message to all directors out there. If you make your movie look "blue-ish". You will put the audience to sleep. You are not being unique or stylish. See Underworld Trilogy for example. Color, People! Keeps things stimulating. Not much else to say. Anthony Hopkins appears at the end for the "Big Reveal" which is so obvious that if you don't see it coming then you shouldn't be reading this. Its suppose to be an action movie too but the action is poorly filmed and cannot generate any sense of excitement. Who cares if Emilio dies. Why don't you just leave him in the past with his impossible high flying car that is attracted to low lying bridges. All I can say in closing is that 2009 is going to be one crap-tacular year.

Use your imaginations people!!!!
Posted by Jason at 6:41 AM